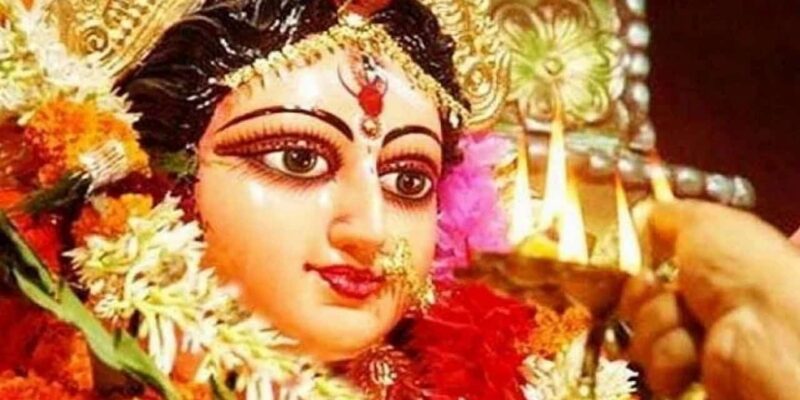 Shardiya Navratri has started. In Navratri, we chant the hymns, lessons and mantras of Maa Durga. Devotees follow the rules of fasting with devotion. Today, on the fifth day of Navratri, Maa Katyayani will be worshipped. Wearing red colored clothes on this day is considered auspicious. During Navratri, devotees take various measures. Along with this, 16 adornments are offered to Mata Rani.

By offering sixteen makeup, happiness and prosperity remains in the house. Also, Mata Rani fulfills all your wishes. Why is Goddess Durga’s sixteen makeup done in Navratri? Let us know the importance behind it.

1. Vermilion- In Hinduism, vermilion is very important for married women. By applying vermilion, the husband has a long life. Before worshiping Maa Durga, women use vermilion for makeup.

3. Red Couple- Maa Durga is very fond of red color. Many people like to worship by wearing red clothes during the worship of Navratri.

4. Gajra- According to Hindu religion, Maa Durga is very dear to Mogre’s Gajra. Gajra can be planted in Navratri to please Goddess Durga.

5. Mascara- Kajal is a makeup that works to enhance the beauty of your eyes. It is believed that by applying kajal, the evil eye is also avoided.

6. Mang Tika – Mang Tika is worn in marriage. There is a belief about the demand vaccine that the newlyweds are worn in the middle of the head so that they always walk on the right path with their spouse after marriage.

7. Nath- In Hinduism, it is necessary to have many ornaments in the nose of married women, so they often wear nosepins. Apart from this, earrings, mangalsutra, armband, bangle, waistband, nettle, anklet, bindi, red color have special significance. All these things are related to your good fortune and each one has a different religious significance.

Also read – What to do and what not to do during Navratri, the use of these things in the Havan of Maa Durga leads to different fruits

This great bike is available here for less than half the price, know the features of this cruise bike

How do injuries ruin a player’s career? This player can become the perfect case study