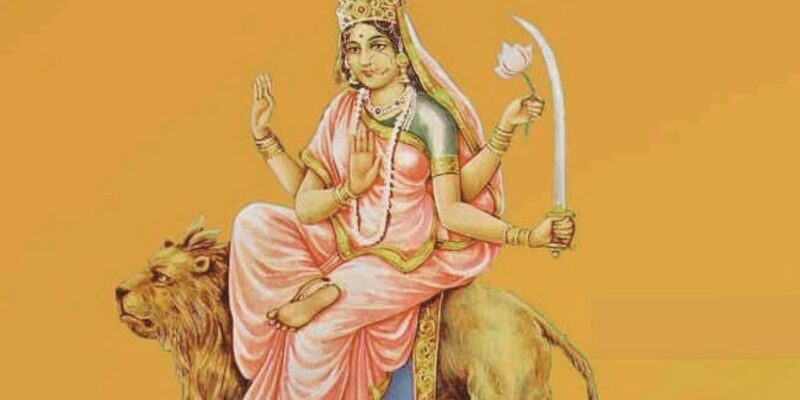 From observing the fast to worshiping the mother, devotees are leaving no stone unturned as we are entering the 6th day of Navratri 2021. Yes, the special Hindu festival that started on 7th October is all set to enter the 6th day, which is dedicated to Maa Katyayani.

Meanwhile, talking about Shardiya Navratri, the most important Hindu festival, it falls during the months of September/October of the Gregorian calendar. According to the Hindu lunar calendar, it starts from the Pratipada date of the Shukla Paksha of Ashwin month.

This is a nine-day long festival which is celebrated with great enthusiasm all over the country. Among the nine incarnations of Mother Durga, each day of Navratri is dedicated to one form.

The Vamana Purana depicts that to kill the demon Mahishasura, out of spontaneous anger, the energy rays of the gods combined and crystallized at the hermitage of sage Katyayana, where he gave it the proper form of the goddess. Katyayani is named as the daughter of Katyayan.

The description of the mother is found in the Devi Mahatmya part of the Markandeya Purana, the credit of which goes to the sage Markandeya. She is worshiped as the Adi Shakti form of Maa Durga. Unmarried girls keep a fast and worship this form to get the husband they want.

Maa Katyayani is four-handed who rides on a lion. In two hands she holds Khadga (long sword) and flower lotus. The other hand is in Abhayamudra and Varadamudra. Maa Katyayani is draped in a red dress. She is associated with the color red and the planet Jupiter.

Devotees should wear clean clothes after taking a quick bath.

The place of worship is cleaned and fresh flowers are changed.

Ghee lamp is lit in front of the Kalash and the idol of the Goddess.

– Prasad is offered and distributed among everyone.

Also read- Dussehra 2021: Not only Lord Rama, Lankapati can also learn from Ravana, these seven big lessons related to life

Also read- Navratri Special: How the hungry lion came to eat Maa Durga, how did her vehicle become her vehicle?

Why every Tata car is being liked so much, know everything in these 5 reasons

Women were the most victims of mental problems in the corona epidemic, a big reason for confusion in home and office work