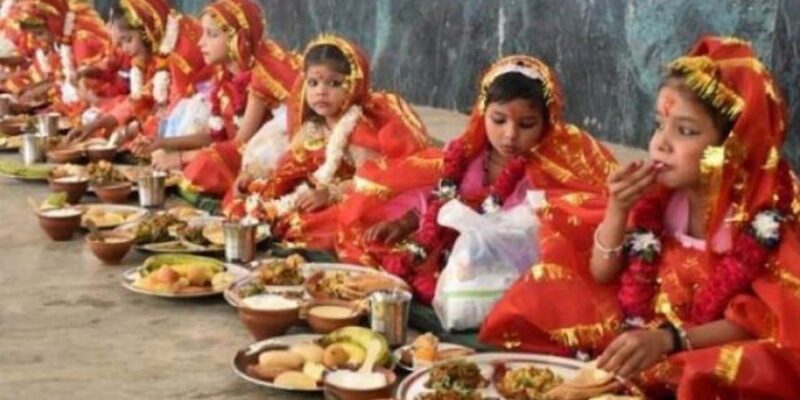 In the scriptures, Kanya Puja or Kanya Bhoj has been described as very important on the occasion of Navratri. In Navratri, all the devotees of Maa Durga worship little girls as incarnations of the goddess.

The people of Sanatan Dharma have a tradition of doing Kanya Puja and Kanya Bhoj for centuries. Kanya Bhoj is considered very important especially for those who establish the Kalash and keep the cycle of nine days.

According to tradition, the Bhavishya Purana and Devi Bhagavata Purana describe the worship of girls in the last two days of Navratri. According to this description, the festival of Navratri is incomplete without Kanya Bhoj.

People can perform Kanya Puja on any day or any time of Navratri festival. But according to mythology, Ashtami and Navami, the last two days of Navratri are considered to be the best days for Kanya Puja.

The nine girls, who are called by different names of all the girls for Kanya Bhoj, are worshiped as nine forms of Maa Durga. According to the age of the girls in the stories, their names are also given.

Therefore, since Kanya Bhoj is very sacred and has so much importance, here we keep some things in mind while performing the puja and rituals.

According to popular beliefs, 9 girls in the age group of 2 to 10 years are called for the feast as this number represents the 9 incarnations of Maa Durga.

It is said that the ideal number for Kanya Bhoj is nine. By the way, people can feed girls less and more according to their faith.

make sure you take a shower

Food should be taken only after taking bath in the morning. And since it is a sacred ritual, it is necessary to wash the feet of the girls as well. Therefore, after cleaning the feet of the girls, make them sit and feed them. Also, keep in mind that the place where the banquet will be held should also be hygienic.

must add a boy

It is customary to keep one little boy together with nine girls. The child is called the form or langur of Bhairav ​​Baba.

Avoid onion-garlic and make kheer, poori, black sandalwood etc. and serve it as prasad to the girls.

While leaving little girls, they are given grains, money or clothes. And in return seek blessings from her as she is considered to be a form of Goddess.

Also read- Dussehra: If you want to see the grand Dussehra celebrations, then go here

Lara Dutta posted on social media, then fans gave this advice regarding her marriage