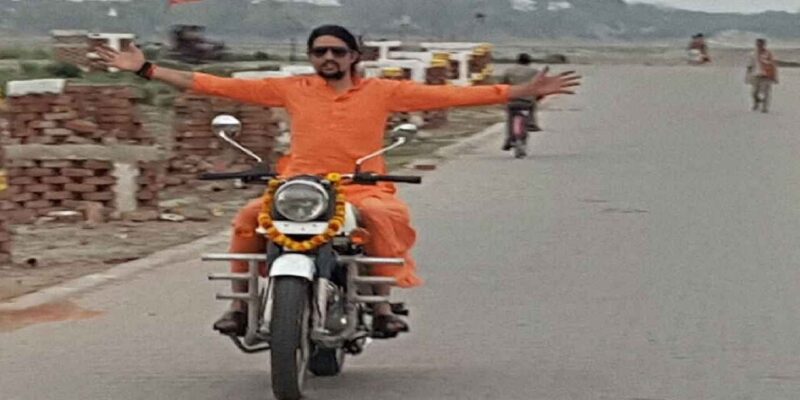 The strings of the suspicious death of Mahant Narendra Giri, the head of the Akhil Bharatiya Akhara Parishad, are seen connecting to an ashram in Haridwar. An unknown person from Haridwar had called and told the Mahant that the accused Anand Giri was going to make his alleged obscene photos viral. The team of CBI is also going to take Anand Giri to Haridwar ashram for questioning soon. In an unexpected development, a person who was running away after stealing the DVR of CCTV cameras from the same ashram in Haridwar late on Monday night was caught by the locals and later handed over to the police.

According to the police, a youth who was running away after stealing at Anand Giri’s ashram located in Seal in Haridwar was caught by the local people and handed over to the police. Police has registered a case against the accused. The accused was trying to escape from the ashram late on Monday night. The local people caught him and handed him over to the police, then the DVR of the CCTV camera was recovered from him. Apart from this, the water motor and juicer have also been reported to be stolen from the ashram. In this case, Shyampur Police of Uttarakhand is registering a case and interrogating the accused and taking further action.

According to the information received, the CBI will soon reach Haridwar by taking Anand Giri on remand and will also interrogate many other people here. In the case of Narendra Giri’s death, the CBI has taken seven days remand of Anand Giri, Aadhya Tiwari and Sandeep Tiwari. The remand is to last till October 4. The ashram of Anand Giri, being built in Shyampur Kangri village of Haridwar, was sealed by the HRDA on 13 May. The arrested youth was running away after stealing the DVR of the CCTV cameras of this ashram.

After the seal was sealed on this ashram, Anand Giri was given shelter by a great saint of Haridwar and the supreme head of the ashram. This was disclosed by Anand Giri himself during an interview after the ashram was sealed. Anand Giri had said that he was taking shelter in an ashram in Haridwar in those days. In the SIT investigation of the UP government, the names and numbers of 18 people of Haridwar have come to the fore in this case so far. There are many saints, influential and property dealers among them. On the basis of the call details of Mahant Narendra Giri’s mobile number, a famous shopkeeper located at Harki Paidi and two property dealers have been called to Prayagraj for questioning.

Narendra Giri Death: The last will of the Baghambari Gaddi Math behind the death of Narendra Giri! CBI is conducting psychological autopsy

Ayodhya: ‘By October 2, India should be declared a Hindu nation, otherwise I will take water samadhi in Saryu’; Jagadguru Paramhans Acharya Maharaj gave a warning

Rashmika Mandanna’s poster out from the film Pushpa, fans were surprised to see the actress