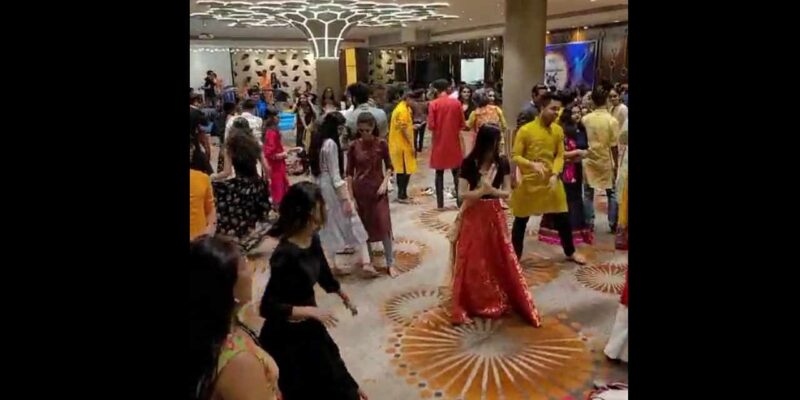 Video of Garba Night at a mall in Santacruz goes viral

A video of Garba Night has surfaced in a mall located in Santacruz area of ​​Mumbai. Under the Corona Rules, BMC has completely banned the organization of Dandiya or Garba. This event was organized at Highlife Mall in Santacruz. More than 150 people were present in this program. In the video, everyone is seen without a mask.

Based on the video, a case has been registered against the organizers of Garba Night at Santacruz Police Station. This Garba Night was organized on Friday. The Brihanmumbai Municipal Corporation had said that in view of the COVID-19 epidemic, the Garba program will not be allowed to be organized during the Navratri festival. Also, the BMC has allowed a maximum of four feet tall idol of Goddess Durga for community mandals and two feet tall at the domestic level.

Keeping the epidemic in mind, the BMC appealed to the residents to strictly follow the safety rules related to COVID-19 and celebrate the festival with simplicity. BMC had issued standard operating procedure and guidelines for the nine-day long Navratri festival. An official said that the BMC has asked the public circles to take permission from the corporation through online medium before installing the idol of Goddess Durga in the pandals.

On Saturday, 2486 new cases of corona virus were reported in Maharashtra, taking the total number of infected people to 65,75,578. While 44 more patients died due to the epidemic, the death toll increased to 1,39,514. The Health Department said that a total of 2,446 people were discharged from the hospital on Saturday, taking the number of people who have become infection-free in the state to 63,99,464. The number of patients currently under treatment in Maharashtra is 33,006.

When Hockey India decided not to send teams to the Commonwealth, the Sports Minister was furious, said- Federation should talk to the government first