Mumbai Rains: On the very first day of monsoon, the claims of BMC are open, water filled in many areas of Mumbai; Local trains also closed 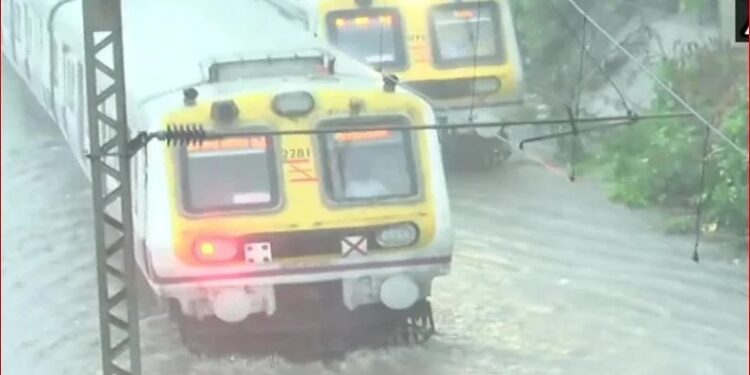 After heavy rains on the first day of monsoon in Mumbai, the situation of traffic jam is visible due to water-logging on many places on the roads. Many local trains have also been suspended due to this.

It has been raining incessantly in Mumbai since morning, due to which there has been waterlogging at many places in the city and there is a situation of traffic jam. The Meteorological Department has issued an alert related to excessive rain from June 9 to June 12. Mumbai’s King’s Circle, Hindmata, Sion. Kanjurmarg, Andheri subway has been completely flooded and movement of vehicles has also been stopped in many places. Roads and railway tracks have been flooded with water. In many places, water has been filled up to two feet. According to the Meteorological Department, the first monsoon rains are happening in Mumbai today.

Local trains (train services on Harbor line suspended) in Central Railway have been closed for some time after rain. Local trains from Thane to Kurla via CSMT have been stopped. Train from Kurla to Sion is somehow slow due to water logging on the track. Trains from Thane to Karjat-Kasara are running slowly. Trains are going on the track going to Uran in the Harbor line. Passengers say that even after standing for more than an hour, the train is not coming. High tide is reported at 11.43 am in the morning.

In the Harbor line also, trains going from Vashi to CSMT have been stopped since 10.20 am due to water filling the track at Chunabhatti station. High tide will come in the sea today at 11:43 am 4.16 meters high. If there is heavy rain in Mumbai at that time, then the low-lying areas of Mumbai may see heavy water logging. In the low-lying areas, water is slowly reaching the nearby shops too. Local people have also been refused to come from these areas. BMC and police are constantly appealing to the people not to pass through this area.

Traffic has come to a complete halt in Mumbai’s Western Express Highway and Eastern Highway. Cars are moving at the speed of an ant. We showed pictures of the place where there is continuous movement of vehicles even in the midst of heavy rains. The traffic police is appealing to the people to drive vehicles with caution. Visibility is also a bit low in Mumbai, due to which the drivers are constantly being asked to drive carefully. Warning has been given and Mumbaikars have been asked to take precautions.

Water up to knees on the roads, water filled the houses

In West Mumbai, it rained overnight in Jogeshwari, Malad, Goregaon, Borivali. In central Mumbai, rain has gained momentum since morning in other areas including K Sion, Kurla, Kanjurmarg, King’s Circle and Lalbagh-Parel in South Mumbai. Somewhere there is knee-deep water in these areas and somewhere water has come inside the houses.

Along with Mumbai, it has rained overnight in Thane, Kalyan, Vasai and Palghar, and it has started raining continuously since morning. The Meteorological Department has issued an orange alert in Raigad district.

The Monsoon Department had given the date of arrival of Monsoon in Mumbai as June 10. Monsoon has arrived in Mumbai a day before. That’s why BMC knew in advance when the right time for monsoon is. There is no excuse for uncertainty. BMC had claimed that this time the drains have been cleaned in a better way than every year and it was claimed that up to 104 percent of the drain has been cleaned and 35 percent more waste has been removed as compared to the previous years Huh. BMC had claimed that a total of 3 lakh 11 thousand 381 metric tonnes of garbage was removed before the rains, whereas 3 lakh 24 thousand 284 metric tonnes of garbage has been removed more than the target.

Mumbai Local train services b/w Kurla & CSMT have been halted, as a precautionary measure; services to resume as soon as the water recedes.#Monsoon pic.twitter.com/YUaETnmv7z

A few days ago, when BJP leader Ashish Shelar had asked to show photos of the garbage removed from the drain, Mumbai Mayor Kishori Pednekar objected. Now that the claims of BMC have been exposed. Mumbai has become ‘Tumbai’ in the very first rain.

MNS leader Sandeep Deshpande while talking to NewsNCR in this regard said that every year in the name of cleaning the drains, tenders worth crores of rupees are taken out and the pockets of the contractors are filled. Public money is wasted, it rains every year, Mumbai drowns every year. Ravi Raja, the opposition leader in Mumbai Municipal Corporation, said this happens because the attitude remains the same. The officers who are given this responsibility are not questioned.