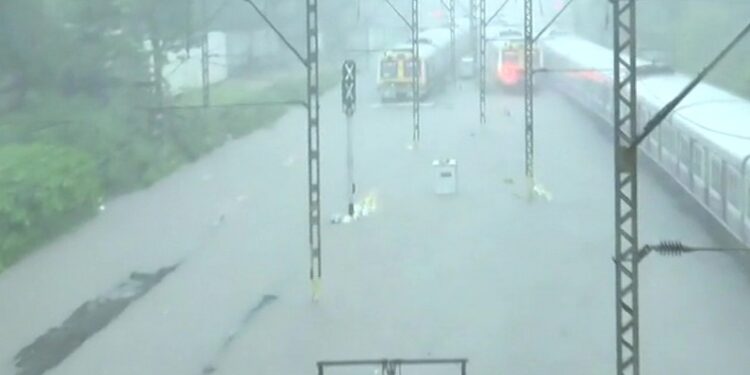 According to Central Railway spokesperson Shivaji Sutar, train services at CSMT, Thane (Main Line) and CSMT, Vashi (Harbour Line) have been suspended from 10:20 am.

After heavy rains in Mumbai, local trains were also closed at many places. (Photo-ANI)

Roads have been flooded on the first day of monsoon rains in Mumbai and local trains have also been suspended due to submergence of tracks. This morning the monsoon has made its first knock in Mumbai and many areas of the city are receiving heavy rains. According to IMD, high tide has come in the sea from 11.43 am. Water is coming in railway tracks, roads, houses and water is not getting out due to high tide in the sea. Regional Meteorological Centre, Mumbai has issued a weather alert for Maharashtra for the next 5 days. BEST bus stopped in Mumbai King Circle area, passengers are being pulled out of the bus. A video has surfaced in which the office located at Santa Cruz Best Bus Depot is flooded but the employees are seen working.

The track at Chunabhatti railway station has been flooded with water. The condition of waterlogging here is that the water has almost reached the platform level. According to the Public Relations Department of Central Railway, train services from CSMT to Vashi (CSMT-Vashi) in Harbor Line have been stopped from 10.20 am due to heavy rains and water-logging near Chunabhatti railway station. At the same time, services from CSMT to Thane have also been suspended on the main line from 10.20 am due to waterlogging between Sion and Kurla. Later, train services on CSMT and Thane (Main Line) and CSMT and Vashi (Harbour Line) were suspended from 10.20 am, Central Railway Chief Spokesperson Shivaji Sutar said. “Trains are running smoothly on Trans-Harbour Line and BSU Lines. Shuttle services are also running from Thane to Karjat/Kasara and Vashi-Panvel.

Mumbai Local train services b/w Kurla & CSMT have been halted, as a precautionary measure; services to resume as soon as the water recedes.#Monsoon pic.twitter.com/YUaETnmv7z

Even before this, ie at 9.50 am, train services from Kurla to CSMT were stopped. Later it was increased and services were stopped from CSMT to Thane. However, when train services were disrupted only from Kurla to CSMT, the Central Railway CPRO had told that this is being done as a precaution. But the rain is continuously starting and the water is getting filled on the track. In such a situation, not as a precaution, trains will not be able to run anyway.

But let us tell you that at present, trains going from Thane to Karjat and Kasara in Central Railway are starting slowly but gradually. At the same time, trains from Vashi to Panvel are started in the Harbor line. At the same time, trains going to Uran are started in the Harbor line. Monsoon caused heavy rains in the country’s financial capital and its suburbs in the morning, affecting normal life. Local train services from Mumbai’s Chhatrapati Shivaji Maharaj Terminal (CSMT) to neighboring Thane and Vashi in Navi Mumbai have been suspended as some railway tracks were submerged due to waterlogging, officials said. . He said that the route of some BEST buses has also been changed.

Traffic came to a standstill on the roads

Let us inform that after the stoppage of train services, now it is becoming difficult to go anywhere by roads. Andheri subway has been closed. Road traffic has come to a standstill due to water logging in many areas like Chembur, Sion, Hindmata, King’s Circle, Lalbagh-Parel, Kurla, Mankhurd. Trains have started running far and wide in the Eastern Express Highway. The condition of the traffic jam is such that the vehicles are moving at the speed of an ant.

KS Hosalikar, head of climate research and services at IMD’s SID, Pune tweeted, “Good news. The Southwest Monsoon has been announced to knock on Mumbai-Thane-Palghar today, June 9. Monsoon is passing through Valsad in Gujarat, Nagpur in Maharashtra and then Bhadrachalam Tuni. Conditions are favorable for the arrival of monsoon in the rest of Maharashtra in the next two-three days. Several parts of the city and suburbs received heavy rain accompanied by thunderstorms in the morning. According to the IMD, the Colaba observatory, representing South Mumbai, recorded 77.4 mm of rain in the last 24 hours while the Santa Cruz observatory (suburbs) recorded 59.6 mm. Rain was recorded. According to the BMC, the city, eastern suburbs and western suburbs recorded 48.49 mm, 66.99 mm and 48.99 mm respectively in the period of 24 hours till 8 am on Wednesday. Rain was recorded.