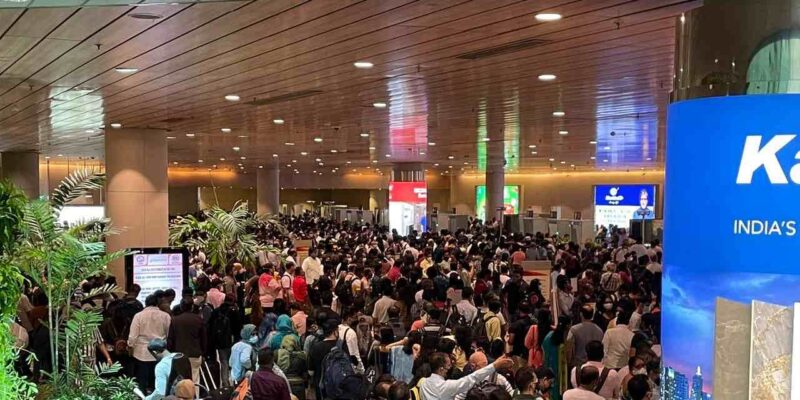 During Navratri, huge crowd is being seen at Mumbai airport. There is an atmosphere of chaos at the airport.

During Navratri, huge crowd is being seen at Mumbai Airport. A large number of people are leaving for their homes. Because of this, there is an atmosphere of chaos at the airport. An atmosphere of chaos and congestion was witnessed at the Mumbai International Airport this morning. In fact, a huge crowd of passengers of Navratri festival left for their home town from Mumbai. During this, the terminal looked exactly like a crowded railway station.

Due to the huge crowd at the airport, many people missed the flight. After which there was a lot of commotion there. Along with this, the airport authorities were held responsible for getting stuck in long queues and poor arrangements for crowd control. Passengers say that due to poor management they were forced to get stuck in long queues. During this, people’s anger broke out on social media. Music composer and singer Vishal Dadlani shared the bad experience at the airport by tweeting.

T2 AT CSMIA (Mumbai Airport) is a shambles.

Who runs this absolute shitshow? Please tag them.

He said that the condition of T2 at CSMIA (Mumbai Airport) is very bad. It seems we are in the dark ages. Crowds for miles, machines breaking down, chaos everywhere. He said that the employees are busy working. But he is unable to control the crowd. Along with this, Singer said that who runs such a bad system. Please tweet them. At the same time, airlines like Indigo warned passengers to report early to give full time to security check.

At the same time, Prakash Gagdani, CEO of fitness firm 5paisa.com, also tweeted about the problems being faced at the airport. He said the normal process of check-in and security check was taking more than an hour. He said that everything is messed up at the Mumbai airport. It is taking at least 1 hour for entry and check-in. After this, a separate time is going in the security check. He said that how can anyone board in this crowd even after reaching two and a half hours before the domestic flight. This is the situation of the financial capital of the country.

Mumbai Airport is a mess. It takes atleast 1 hr to enter and do check-in and then this crowd for security check. How can someone board a flight even reaching 2 1/2 hrs before domestic flight. This is the real commercial capital of the country. pic.twitter.com/OII3s46GZh

At the same time, a spokesperson of Mumbai International Airport said that the number of passengers has increased in the festive season. There was a sudden increase in the number of passengers this morning. Due to the increasing crowd, Terminal-1 will be started from October 20. The risk of spreading corona is also increasing amidst the increasing crowd at the airport. On Thursday, 458 new cases of corona were registered in Mumbai. With this, 5 people died.

Australia will deal with online hate speech, PM said about social media – instead of ‘cowards’, where people ruin the lives of others