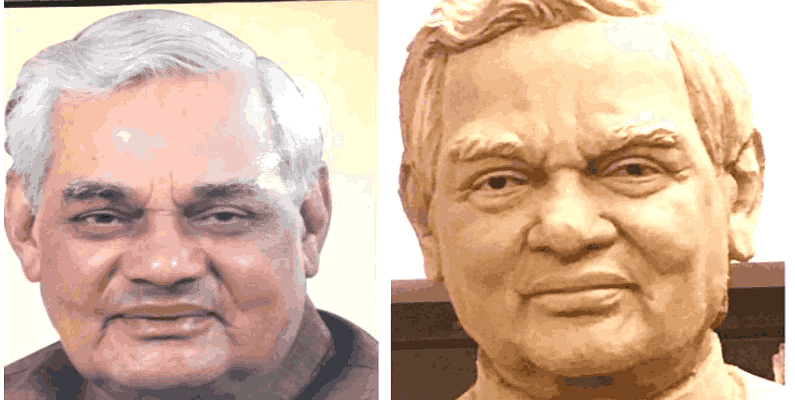 A different sight was seen in Dewas of Madhya Pradesh on Wednesday. Former Prime Minister of India Late Shri. The statue of Atal Bihari Vajpayee has been there for six months, but this statue has not been unveiled yet. This statue is to be unveiled to the state’s chief Shivraj Singh Chauhan (cm Shivraj Singh), but before the unveiling yesterday, a person took a ladder and removed the cloth from his face. Not only this, the person also wore a necklace on the statue of Atal ji.

Actually, self. This statue of Atal Bihari Vajpayee has not been inaugurated for a long time. It was to be unveiled on the arrival of Chief Minister Shivraj Singh Chouhan in Dewas in the past, but it was not unveiled. The face of the statue was covered and kept. At the same time, Congressmen also targeted BJP for not unveiling the statue. Congress State General Secretary Pradeep Chaudhary had said that BJP forgot its senior leaders, about which BJP had said that the statue would be unveiled soon.

The common man unveiled the statue

The statue was unveiled at 5.30 pm by a local youth wearing a necklace and flowers by law. The local BJP leaders and workers reached there after getting information. At the same time, the employees of the Municipal Corporation also reached to cover the face of the statue. BJP’s local leader Arjun Chaudhary accused the Congressmen and said – The statue was going to be unveiled soon, but the Congress was not liking it. Today it has been unveiled by the people of Congress.

Also read- Shivraj government bowed after the protest of MP Sadhvi Pragya Thakur regarding sterilization of bulls, took the order back

Also read- MP: By-elections to 1 Lok Sabha and 3 assembly seats on October 30, the fate of 55 candidates at stake; Counting of votes will be held on November 3

Is the country facing coal shortage? Finance Minister Nirmala Sitharaman made everything clear with her statement

Lalitpur Gangrape: 4 arrested including accused father, SP-BSP came to the rescue of their respective leaders