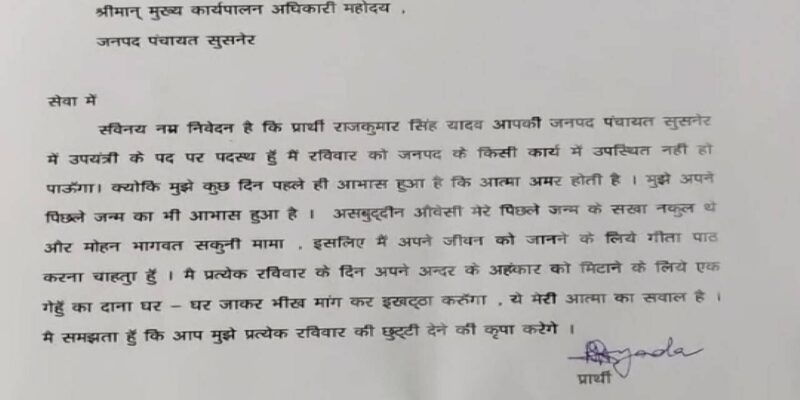 MP is amazing and really amazing. Here, not only common people do different feats, but government officials and employees also do more than one feat. One such wonderful work has been done by Rajkumar Yadav, an engineer posted in Susner district of Agar Malwa district. Actually Engineer Rajkumar had applied for leave to his senior officer. In his application, Rajkumar described All India Majlis-e-Ittehadul Muslimeen (AIMIM) national president Asaduddin Owaisi as a friend of his past life and called RSS chief Mohan Bhagwat as ‘Shakuni Mama’.

The engineer has written in his letter that he has come to know about all this in a dream about his previous birth. At the same time, this leave-seeking application of the engineer is becoming very viral on social media.

‘I realized a few days ago that the soul is immortal’

In Agar Malwa of Madhya Pradesh, a sub-engineer has written a leave application to his superior saying that he gained recollection of his past life and wanted to do Bhagavad Gita paath to know more about his life & also beg alms to erase ego every Sunday pic.twitter.com/qOmMpyZB9j

The engineer has written in his leave application that ‘I am applicant Rajkumar Singh Yadav is posted as Deputy Engineer in your district panchayat Susner, I will not be able to attend any work of the district on Sunday because I have realized a few days ago that the soul Is immortal. The engineer further wrote in the application that I have also realized my previous birth’.

The engineer further wrote in the letter that ‘Asaduddin Owaisi was my previous birth’s friend Nakul and Mohan Bhagwat Shakuni Mama, so I want to read Gita to know my life. Every Sunday, I will collect a grain of wheat from house to house by begging to eradicate the ego inside me, this is a question of my soul. I understand that you will be pleased to grant me leave for every Sunday’.

In a strange way, the senior replied to the letter

Engineer had posted this application in the official group. After this, Parag Panthi, CEO of Susner has responded to him in the same manner. He wrote in the group that dear deputy engineer, I am very happy to know that you want to erase your ego. A person is often arrogant and thinks that he can spend his Sunday on his own accord. Destroying this ego in its seed form is indispensable for your progress.

Keeping in view your desire for spiritual progress, you are ordered to work on every Sunday by being present in the office, so that your ego of celebrating Sunday as a holiday can be destroyed. With the pleasure of becoming a seeker in your spiritual progress.

Also read- Madhya Pradesh: The health of more than 50 people of the same village deteriorated after consuming Bhandara’s food, admitted to the district hospital; 5 in critical condition