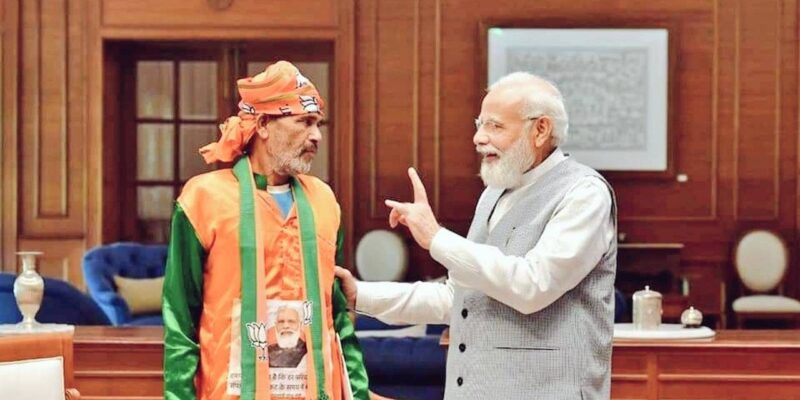 BJP worker Chhotelal Ahirwar from Sagar district of Madhya Pradesh reached Delhi on foot today to meet PM Narendra Modi. During this, PM Modi also met him warmly. The pictures of the meeting of both are becoming increasingly viral on social media. Madhya Pradesh CM Shivraj Singh Chouhan has praised PM Modi for his tweet on this matter. He tweeted and said that PM Modi has a lot of love for the people in his heart. Every citizen of the country is very dear to him.

CM Shivraj Singh Chouhan said that BJP worker Chotelal Ahirwar reached Delhi on foot from Deori in Sagar district. The PM stunned everyone by meeting the party worker. Let us inform that Chhotelal Ahirwar met PM Modi by tying BJP’s lotus gamchha to his forehead and wearing the party’s gamcha around his neck. During this, PM Modi talked to him on many issues. During this, Chhotelal was seen listening carefully to the words of the PM.

Prime Minister arenarendramodi There is immense affection in the heart of the people for Ji, while every citizen of the country is dear to him. Reached Delhi on foot from Deori in Sagar district of MP to meet PM Shri @BJP4MP He stunned all of us by meeting activist Chhotelal Ahirwar. pic.twitter.com/RClolb01vc

PM Modi met BJP worker with full open heart. During this, the PM asked him what was the need for him to come to Delhi on foot to meet him. Responding to this, Chhotelal said that if he had not come on foot, he probably would not have met. After the meeting, Chhotelal told that the PM hugged him on seeing him. Chhotelal had come to meet the PM wearing the BJP flag. He handed over a demand letter to the PM for setting up a factory in Deori area. During this, the PM told him about the schemes being run for the poor.

Let us inform that BJP worker Chhotelal has reached Delhi from Deori in 20 days. He traveled 700 km on foot to meet the PM. Chhotelal is a laborer by profession. As soon as Union Minister Prahlad Patel got the information, he immediately arranged to meet his PM. Chhotelal started his journey on 22 September from Deori. He reached Delhi on 11 October.

Many big leaders of BJP have praised PM Modi for meeting the worker by tweeting. Prahlad Patel tweeted that the price of a common worker and common man is only the one who understands that strength and pain. This is the strength of democracy as well as the nobility of PM Modi. Who reached Delhi on foot from Deori and met Chhotelal Ahirwar.

Also read- The miscreant who escaped by dodging the police during the medical checkup in the hospital, was caught from Dewas station after a few hours