Mother cut her own leg for the birth of a son, know why this happened 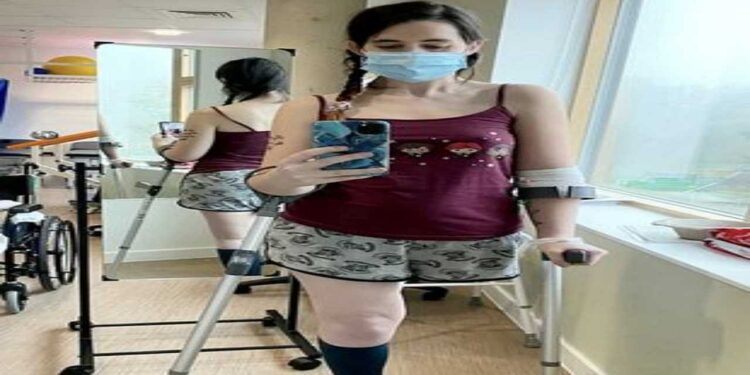 The story of mother’s sacrifice is not new. Often mothers have been sacrificing themselves for their children. These days again a mother is making headlines all over the world because she even cut her own leg for the birth of her child.

Kathleen has had cancer twice before.

Well, who does not know that the mother goes through anything for her children. We must have seen it happen so often that when it comes to the life of her child, then the mother does not even care about herself. It is also difficult to guess what a mother can do for her child. A UK mother has amputated her entire leg to give birth to her baby safely. People are also praising this brave mother fiercely. Now this story is winning the hearts of the people.

According to a report, 28-year-old Kathleen Osborne, living in Visbek, UK, came to know during pregnancy that she had a tumor in her leg. The doctor said that if Kathleen wants, she can lose her unborn child and take chemo therapy, otherwise she will have to have her leg amputated for this. But the mother got herself amputated to save her unborn child. In the fourth month of pregnancy, her leg was amputated and in March she gave birth to a premature baby. Many people became emotional after hearing this lovely story.

In fact, Kathleen has had cancer twice before. According to a report, Kathleen says, ‘I am happy with my decision, because I wanted a sister for my 2 elder sons. I have only a few months or a few years left now. So during this time I want to save some great memories by spending time with my children. Now he is everything in my life, I don’t care about myself. As long as I am alive, I want to live happily with my children. After knowing Kathleen’s story, everyone was convinced of her courage.

Also read: The rapper removed his hair and put a gold chain on his head, everyone was stunned to hear the news