Mohit, who came into the limelight by promising to give a smartphone for Rs 251, is now in action in the dry fruits scam of 200 crores, gangster act against 7 accused 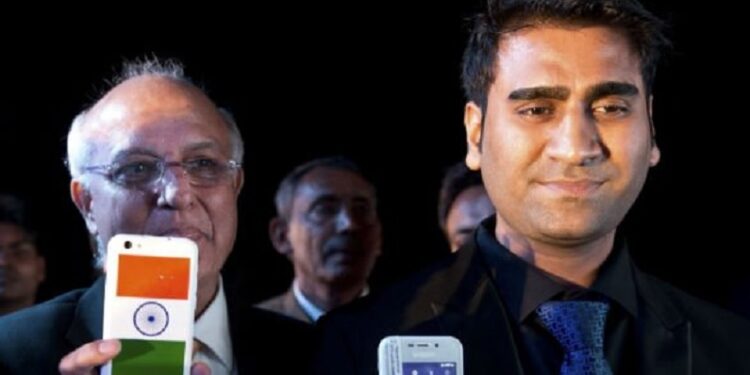 Mohit Goyal, a resident of Shamli, had opened a company named Ringing Bell in Sector-63. Mohit launched the smartphone in the name of Freedom-251 in February-2016.

The main kingpin of the gang is Mohit Goyal, who cheated millions of people of the country by claiming to give them smartphones for just Rs 251 in the year 2016 (File Photo)

Police station Sector 58 has taken action under the Gangster Act against seven people arrested in Noida’s famous dry fruits scam case. Mohit Goyal, who cheated lakhs of people by promising to give them a smartphone for Rs 251 five years ago, is said to be the kingpin of this gang. All of them are accused of cheating more than two hundred crores by forming a company in the name of dry fruits business.

He told that more than 24 fraud cases are registered against these thugs in different police stations of the country including Gurgaon, Moradabad police station Phase-3. He was arrested by the police station Sector 58 in January 2021.

Millions of people were cheated of crores of rupees

He told that the main kingpin of this gang is Mohit Goyal, who in the year 2016 had duped lakhs of people of the country by claiming to give them smartphones for just Rs 251. Bought dry fruits, rice, spices etc. and gave them a check instead of cash for payment, which bounced. He told that this scam is more than 200 crores.

Then the company had booked more than seven crore mobile phones.

Mohit Goyal, a resident of Shamli, had opened a company named Ringing Bell in Sector-63. Mohit had launched the smartphone in the name of Freedom-251 in February-2016 and claimed that he would give a smartphone in the hands of people for Rs 251. After the branding, marketing of the phone, there was a tremendous booking of this phone online. Then the company claimed to have booked more than seven crore mobile phones in this company, but the people who booked later did not get the phones. After this, legal action was taken against the owner of the company and the entire gang.

Uttar Pradesh: 90 Dalit families put up posters of ‘Makan Bikau Hai’ on their homes in Hapur, there was a stir in the administration