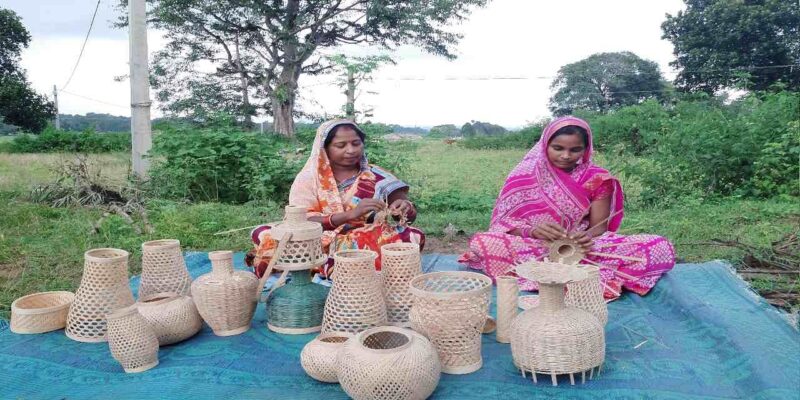 “Today the result of our hard work is that Prime Minister Narendra Modi sir will mention us in Mann Ki Baat program and talk to us. We have struggled a lot to reach here.” By listening to these words of Meera Devi, a rural lady full of enthusiasm, you can understand that if hard work is done with sincere heart and dedication, then every wall breaks down. Meera Devi is the president of Adarsh ​​Bamboo Mahila Karigar Samiti, Kello. Which PM Modi will mention in his program ‘Mann Ki Baat’ today i.e. on 26 September, as well as talk to the women of the committee during this time.

Kelo village of Jaipur Panchayat of Rania, about 85 km from the capital Ranchi, will now be discussed in Delhi because in the program ‘Mann Ki Baat’ Prime Minister Narendra Modi will mention and talk to the women of the village. With this, this village will get a national identity and other members of Adarsh ​​Bamboo Artisan Committee including Meera Devi will get recognition for their skills. Jharkhand Livelihood Promotion Society (JSLPS) has helped him a lot in taking him to this point.

Simran Devi, a member of the committee, said that in 2017 she was trained by the Women’s Development Committee in the village and elsewhere. Since then he was working continuously. After this he was supported by JSLPS. Then he started doing better. The committee has 20 women members. The women of the committee tell that their husbands also cooperate with them in this work, which makes their work easier.

The women who are in the Adarsh ​​Bamboo Karigar Samiti, from the beginning, used to make traditional bamboo items like soups, douras and baskets etc. This work was going on in his house for generations. But with the changing times, the use of these goods has come down. Women recognized this change of time, took training and started making bamboo decoration items. Today, all the members of the committee earn three to four thousand rupees per month from this work, although they believe that their income can increase further if they get a good market to sell their products.

Meera Devi tells that a particular species of bamboo is used to make bamboo items. Which is called canoe bamboo in the local language there. Meera Devi told that it costs 100 rupees to buy a bamboo and a product of eight to nine hundred rupees is ready from it. The products made by rural women charge an average of Rs 200 to 250 per piece. Meera Devi tells that she sells her product at the local level, apart from this she sells her products in the fair organized by the state government. They have to go to West Singhbhum, 45 km away, to buy bamboo.

Meera Devi says that it is a matter of great pride for us that the Prime Minister will mention us in his program and talk to the members of our committee. The struggle we put in during the training has paid off today. With this the name of our village, block and district will be illuminated. He said that it is good to cooperate in the house by earning money.

Kelo is the village of Rania block

Kelo village is located in Rania block of Khunti district. Rania block is surrounded by dense forests and mountains. Until a few years ago, Rania block was considered to be the most Naxal-prone area of ​​Khunti district. People were afraid to pass through the roads here during the day, but now the situation is changing rapidly. Roads have become good in the area. Villagers are getting basic facilities. There is a paved road to reach Banana village too, but it has become dilapidated. Although there is electricity in the village. Villagers have got the benefit of Pradhan Mantri Awas Yojana. Villagers have also benefited from Ujjwala gas connection. However, this benefit is not yet available to the entire population. The women of the village tell that now there is a problem of water in the village.

Birth Anniversary: ​​When Dev Anand was in love with Zeenat Aman, 20 years younger, due to which person his heart was broken?