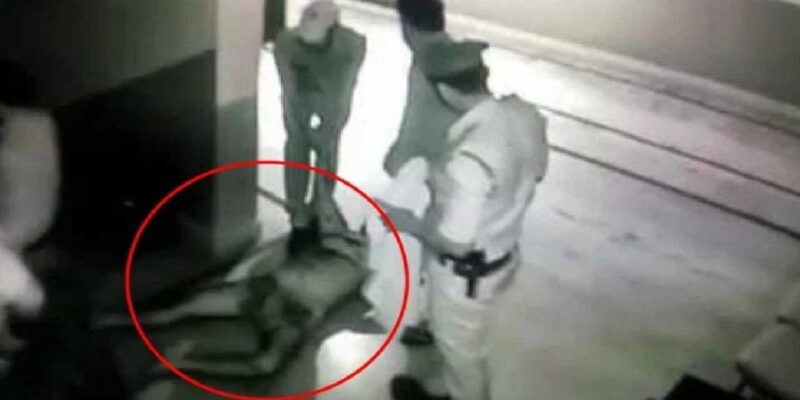 In the Manish Gupta murder case, the CCTV footage of the hotel surfaced.

Kanpur businessman Manish Gupta (Manish Gupta Murder CaseA new twist has come in the case of death due to beating of police in a hotel in Gorakhpur. The CCTV footage of the night the police had reached Manish’s room has come to the fore, in which the story of the police once again seems to be proved to be fake. It is clearly visible in the CCTV footage that when the police took Manish out of the room, there was no movement in his body and he was dragged out on the floor. After this, with the help of hotel staff, Manish was brought to the lift and later to the police jeep.

After the video surfaced, it has become clear that when the policemen brought out Manish Gupta from room number 512 on the night of 27 September, there was no movement in his body. Inspector Jagat Narayan Singh was also present on the spot at that time and it was Jagat Narayan who had sent the lifeless Manish down the lift along with other inspectors and other policemen. Earlier this CCTV footage was said to be missing but now it is present with the SIT. According to the report of Hindi newspaper Amar Ujala, at 12:10 pm, the then outpost in-charge Akshay Mishra brought Manish out of the room. There was no movement in Manish’s body at this time. Another inspector had taken Manish’s hands and feet from other policemen and two hotel staff and got him down from the lift of the hotel.

Police’s story is being proved false by CCTV footage

Police had told that when Manish was taken to the hospital, he was conscious. However, it is seen in the video that after bringing him out of the room, the policemen make Manish lie down near the cupboard. There is no other cloth on Manish’s body except underwear. Meanwhile, another policeman comes with a towel, wrapped in which four people take Manish to the lift. Due to being heavy, apart from the police, two hotel staff had caught Manish’s hands and feet, while Inspector Jagat Narayan Singh, who was standing nearby, did not even help to lift him.

Manish’s wife had found a towel from the hotel room in which Manish’s blood was soaked. The towels seen in the video were also returned by the policemen to the hotel staff after Manish was put in the car. It is believed that the staff may have put that towel again in Manish’s room. Manish was badly injured, so there was blood on the towel.

Let us tell that Manish Gupta, a resident of Barra, Kanpur, had come to Gorakhpur on the morning of September 27 at eight o’clock with his two friends Harveer and Pradeep. All three were staying in room number 512 of Hotel Krishna Palace located in the planetarium. On the night of September 27, Inspector Jagat Narayan Singh, in-charge of Ramgarhtal police station, Akshay Mishra, who was in charge of the Falmandi outpost, and six policemen reached the hotel after midnight for checking. During this, there was an altercation over something and Manish died due to the beating of the policemen.

Initially, the death was told by the police due to falling intoxication, but later a case of murder was registered. In the post-mortem report, a murder case has been registered against three named and three unidentified persons after several injury marks were found on Manish’s body.

Lakhimpur Violence: Rahul-Priyanka met the families of the slain farmers, sat down and drank tea together and said- We too are like your children; read what happened

‘There will definitely be a morning of this night of cruelty,’ said Rahul Gandhi after meeting the victim’s family in Lakhimpur Kheri

IPL 2021 KKR vs RR Live Streaming: Know when, where and how to watch matches