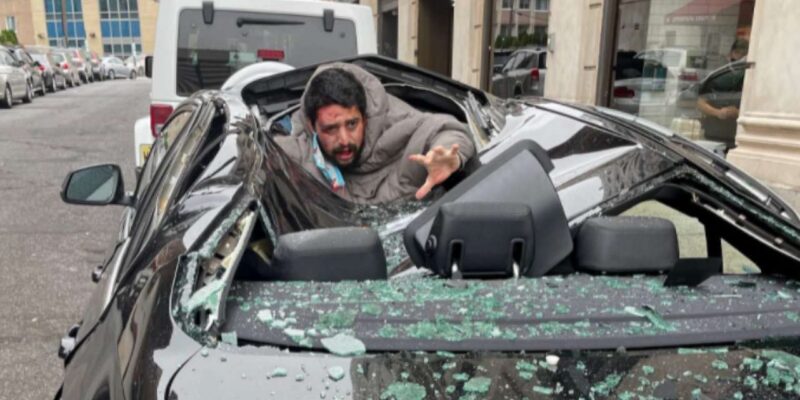 The height from where the man had jumped down was about 100 feet.

If a person falls from the 9th floor, then it is obvious that his death is certain. But in a city in America, a person survived even after jumping from the 9th floor of the building. Actually the person who fell from the building had fallen on the BMW car. Now even after falling from such a height, he survived. People were stunned to hear this news. People present on this occasion-e-incident told that this incident happened on Wednesday at 26 Journal Square.

According to a report, eyewitness Smith said, ‘At first I heard a big bang. In such a situation, at first I thought that this man has not fallen. After this the rear glass of the car was broken. Actually the person who had fallen on the car was screaming in pain. His arm was completely twisted as he fell. It looked exactly like an action scene from a movie. Smith immediately called the police and informed about the incident.

In another report, it is being said that the height of the person from where he had jumped was about 100 feet. Due to which there were many injuries on the upper parts of his body. However, the surprising thing is that even after falling on the car, he himself was trying to stand up. But seeing his condition, people stopped him from doing so. When the police and the ambulance came, he was saying leave me alone because now I want to die.

Mark present there gave this information. At present the police is investigating the matter. On one hand, the police is engaged in the investigation of this matter. At the same time, there are some people who were shocked after hearing this news. Many people cannot believe that after all, how can one survive even after falling from such a height. That is why this news remains the reason for the interest of the people.

Rajasthan: Deadly attack on Congress leader in broad daylight after getting out of moving car and beaten with sticks

Samantha’s mission in Mumbai, know what is her new preparation to set foot in Mayanagari? deployed the team