Maharashtra: Here onion is cultivated thrice in a year, know how the soil should be, what are the main varieties 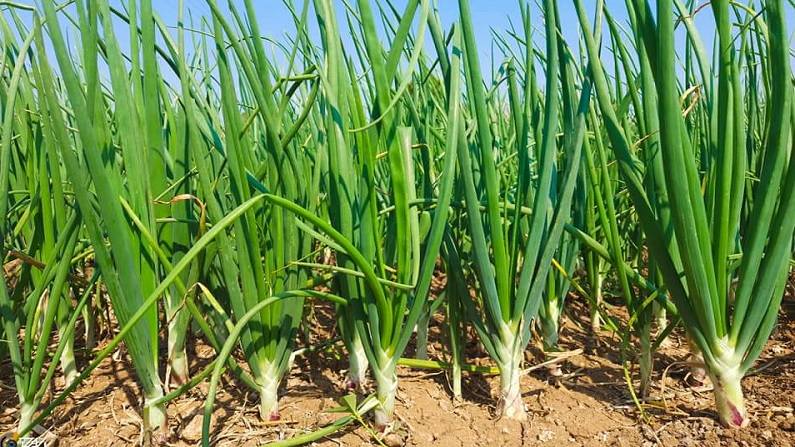 Onion Farming: Loamy soil is suitable for onion cultivation, Dhule, Ahmednagar, Nashik, Pune and Solapur are the strongholds of onion production in Maharashtra.

Onion is usually grown only once in a year in many states, but this is not the case in Maharashtra. In the largest onion producing state, three crops are taken during a year. Because of this, usually onion prices in the country are fixed from here. It is grown here in Kharif, post Kharif and Rabi season. In the Kharif season, onion is sown in the month of July-August, which is continuing in many districts of Maharashtra these days. The onion crop sown in Kharif season will come in the market in October-December.

Onion is an important vegetable and spice crop. It also contains protein and some vitamins. Medicinal properties are found in it. According to the farmers of Maharashtra, its plant is prepared first. If the plant is good then the yield is also good. It is cultivated the most in Nashik, Solapur, Pune, Ahmednagar and Dhule districts of Maharashtra. But Nashik is the most famous. Asia’s largest market is located in Lasalgaon in this district.

In the second season of onion, sowing is done in the month of October-November. It gets ready from January to March. Rabi crop is the third crop of onion. In this, sowing is done in December-January while the harvesting of the crop takes place from March to May. 65 percent of the total onion production of Maharashtra is done in the Rabi season itself. Many times due to the crop, its prices remain under control in the country. Otherwise the consumers would have to pay a higher price for it.

Know about the main varieties

For Maharashtra, Gujarat, Karnataka, Rajasthan and MP, Bhima Super is reported to be a good variety for Kharif season. This red variety of onion can also be cultivated late. Its production in Kharif is 20-22 tonnes per hectare. This crop is ready in 100-105 days in Kharif and in 110 to 120 days in late Kharif.
Whereas in the Bhima dark red onion variety, the tubers are dark red in color, flattened and rounded. This variety matures in 95-100 days and gets ready. Its yield is about 20-22 tonnes per hectare.

Onion is white in color in Bhima Shweta variety. At present, this variety is grown in Rabi season only. According to agricultural scientists, this variety, which is ready in 110-120 days, gives an average yield of 18-20 tonnes in Kharif and 26-30 tonnes in Rabi.

Pusa Ratnar variety of onions are large and slightly flattened. It is dark red in colour. It is ready for digging 125 days after transplanting. Whereas Kalyanpur Red Round variety is considered good for Uttar Pradesh. This variety matures in 130 to 150 days. Talking about Pusa Red, its onions are of medium size and red in color. This variety matures in 125 to 140 days after transplanting.

what should be the soil

According to agricultural scientists, onion can be cultivated in different types of soil. However, proper drainage and fertile loam and loamy loam soils are considered good for its cultivation. Onion should not be grown in more alkaline or marshy soil.

Curry has special importance in its cultivation. The first plowing of the field should be done with soil turning plow. After this, do 2 to 3 plowing with cultivator or Hera. Be sure to plant a pad after each plowing. So that moisture is protected. Also the soil should become friable. The land is transplanted on a 1.2 m wide strip at a height of 15 cm from the surface.

how much fertilizers to use

Onion crop requires a lot of nutrients. The use of manure and fertilizer in onion crop should be done on the basis of soil test only. Decomposed cow dung at the rate of 20-25 tonnes per hectare should be applied in the field one or two months before transplanting.

The site chosen for the nursery is first plowed. After this, a sufficient amount of rotted manure or compost should be added to it. Sandy loam land is suitable for nursery.