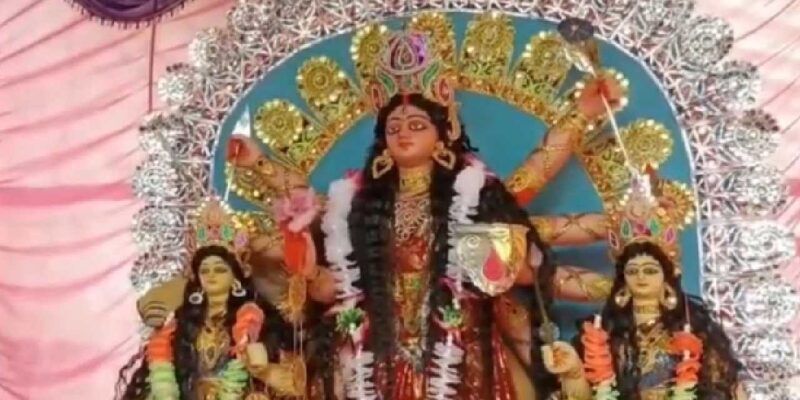 Photo: The worship of Mahamaya Durga was completed in Dhenua village, Burnpur, Asansol.

Generally Navratri ( Navratri) in Maa Durga (Durga Puja) The nine forms of worship are performed in nine days, but Kali Krishna Yogashram, located in Dhenua village of Burnpur, Asansol, West Bengal, is performed in one day itself. One Day Durga Puja ) is accomplished. Goddess Durga is worshiped on the day of Mahalaya and Ghat is immersed in a day. This Durga Puja is also known as Mahamaya Durga Puja. According to the information received, the worship from Shashti to Dashami is done in one hour. This unique Durga Puja is being organized for the last 48 years. This puja is organized every year on the day of Mahalaya i.e. at the end of Shradh Paksha.

This year also this unique Durga Puja was organized amid the Corona crisis. In view of the Corona epidemic, this time the worship was done by following the rules. Such a unique one-day puja is held only in Assam and the other in Dhenua village of Paschim Vardhman district of West Bengal. There is a lot of enthusiasm among people about this worship and people join the worship with full faith.

Chanting from Shashti to Dashami is done in one hour

On the day of Mahalaya, all the chants of Shashti, Saptami, Ashtami, Navami and Dashami are worshiped within an hour. Worship is started in Pitru Paksha and duly ended in Goddess Paksha. In this, the virgin form of Maa Durga is worshipped. Durga Puja is done duly by keeping the idols of Jaya and Vijaya two sakhi in the puja and the ghat is immersed. Although the statue will remain. Which people will see. Here physical distancing and masks are mandatory.

This unique Durga Puja being held since 1973

Since 1973, this puja is performed at Kali Krishna Yogashram in Dhenua village, which was started by Satyanand Brahmachari. Although the worship was closed for three years after the first time. Anokhi Durga Puja was re-initiated in 1977 by Tejnanda Brahmachari, who came from Assam. After his death in the year 2003, a complete puja is organized in the ashram under the aegis of Gauri Kedarnath Temple Committee.

West Bengal Durga Puja 2021: ‘Farmers’ movement’ will be seen in Kolkata’s Durga Puja pandal, will tell the stories of farmers

Kolkata Durga Puja 2021: ‘Maa Durga’ will kill ‘Coronasur’, Durga Puja of Mohammad Ali Park will give a message of victory over Corona

Historical! For the first time in the country, the punishment in the rape case trial was on the fifth day, 20 years of imprisonment with a fine of 2 lakhs

JioDown is trending on Twitter, users are complaining about Jio service not working