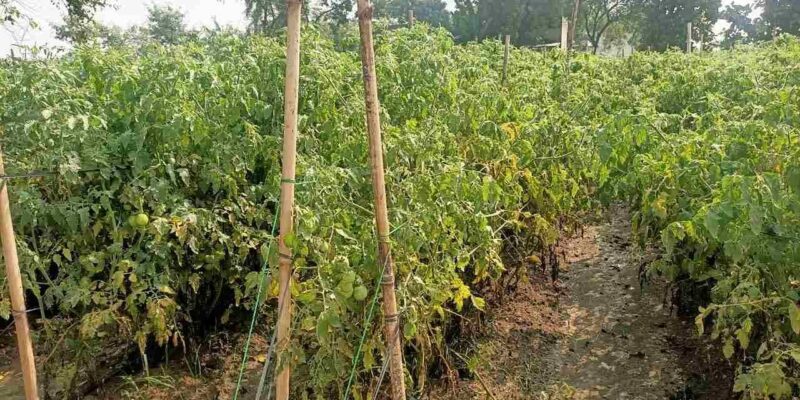 Tomato is cultivated on a large scale in Madhya Pradesh. The state is known for high quality tomatoes. In Madhya Pradesh, a large section of farmers cultivate tomatoes in areas like Shajapur, Shujalpur, Kalapipal, Sehore and Baktra. But in this entire area tomato is grown after monsoon. Tomato is also cultivated on a large scale in the area around Shivpuri during and before the monsoon. Apart from Shivpuri, there are tomato growers in the areas of Kolaras, Pori, Bairad. Here tomatoes of Namdhari 962, Abhilash and Sahu species are planted more.

Joginder Singh Jat, a resident of Khataura village of Badarwas tehsil of Shivpuri, told NewsNCR that he has planted tomato crop in 17 acres. In which only 25 percent production is left. Where last year 50 carat tomato was produced every 5th day in 1 acre. At the same time, on the fifth day per acre, even 10 carat tomatoes are not able to come out completely.

According to the information, this year there has been a negative effect of excessive rainfall on the tomato crop, due to which the price of tomato has reached Rs 1100 per carat in the wholesale market. This has also affected the common man and he has to pay more for tomatoes. Talking about the retail market, tomato is being sold at Rs 70 per kg.

Farmers say that the crop has been damaged due to excessive rain. The crop which was planted after the rain, due to excessive water in the ground, its root also became weak, due to which the plant could not grow properly. And there was disease in the plants. Till last year, the cost of tomato crop which used to be about Rs 1 lakh per acre, has reached Rs 1.8 lakh per acre this time. Because of this, there were already chances of tomatoes becoming expensive. As expected, the tomato crop also turned out to be less, due to which the cost of farmers increased further.

Tomatoes are sent from Shivpuri to Lucknow and Kanpur

Shivpuri’s Rural Garden Extension Officer CR Argal informed in a conversation with NewsNCR that tomato is produced in 10 thousand hectares of area in Shivpuri alone. If Kolaras and Pori are mixed, tomato is grown in an area of ​​more than 12000 hectares. Brown dots, black dots, black and green mosquitoes and sebular have attacked due to excessive rainfall this year. Because of this crop production has dropped. The maximum tomato is sent from Shivpuri to Lucknow and Kanpur, where it is likely to be more expensive.

Fertilizer Crisis: If there is full supply of fertilizer, then why are farmers standing in line for DAP?