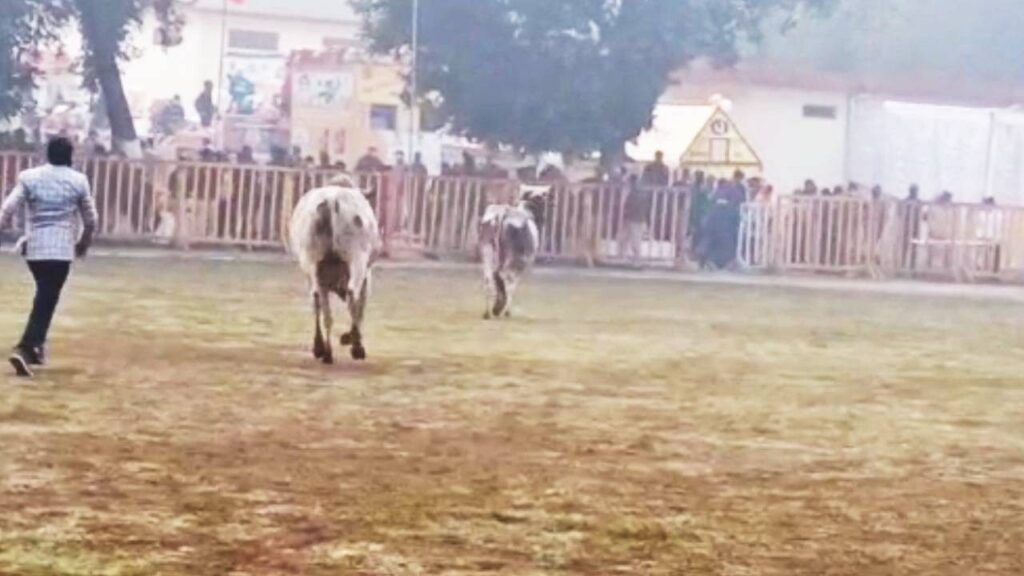 The animals entered through the VVIP gate, on which about two dozen policemen were stationed. The constables Fosu Khan and Rahul Tomar ran to drive away the animals, when the bull attacked both of them with a horn on their chest.

Madhya Pradesh (Madhya Pradesh) Republic Day in Bhind (Republic DayOn the occasion of ) in-charge minister Govind Singh Rajput had arrived for the flag hoisting. But here there has been a big lapse in their security. The venue of the event was Parade Ground. Where the minister in charge was giving his address after hoisting the flag, then stray bulls entered there. For a long time, the animals had to struggle to drive away. Two bulls kept running here and there all over the ground. Two policemen were injured while taking out the free animals. Those who have been admitted to the hospital for treatment.

The animals entered through the VVIP gate, on which about two dozen policemen were stationed. The constables Fosu Khan and Rahul Tomar ran to drive away the animals, when the bull attacked both of them with a horn on their chest. The animals injured both, who were admitted to the district hospital for treatment. In this attack, three ribs of Fosu were broken. In-charge minister Govind Singh was speaking when the animals entered. He was also stopping in between during his address. During this, DM, SP and other officers were present on the stage.

There was chaos as soon as the bull entered the parade ground. In the midst of so much security, the entry of bulls into the parade ground raises a question mark on the system. At the same time, the minister in charge reprimanded SDM Udai Singh Sikarwar for the arrangements in the circuit house while returning. He said, “Your arrangement is not correct. Next time you come, take care. I have scolded the collector a lot. Make the arrangements right or else go home and leave.

The country celebrated the 73rd Republic Day on Wednesday. During this, in Madhya Pradesh, CM Shivraj Singh Chouhan hoisted the flag at the Nehru Stadium in Indore on the occasion of Republic Day. After that took the salute of the parade. But during this an accident happened. A drone fell during the parade. Due to which two people got injured. It was a very big drone. A woman suffered a serious head injury due to the fall of the drone. The woman was dancing by participating in the tableau of Gayatri Kunjam Tribal Department. Then the drone fell on his head. Spraying of insecticides was being demonstrated in the fields through drones.