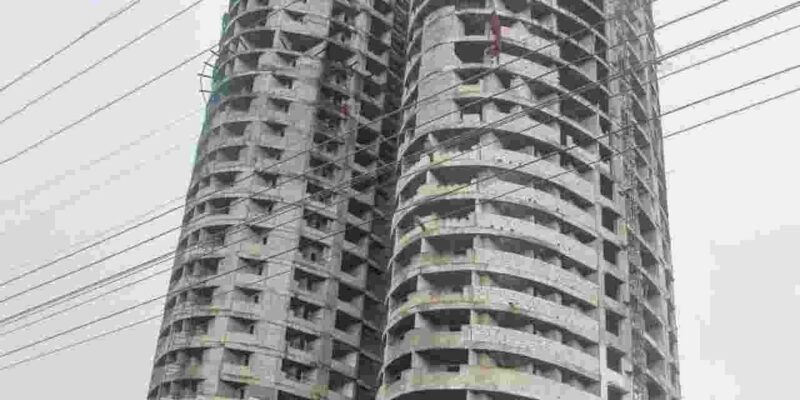 In Greater Noida, people got houses but neither got security nor registered

If the builder shows, Mungerilal has a dream but it turns into a scary dream for the buyers. Today’s report is from Greater Noida where people got houses but neither got security, nor registered. When the project of Shri Radha Sky Garden Society was about to be launched 10 years ago in Greater Noida West, builder Ram Agarwal showed a great video.

But today after 10 years, when people have started living in this society, then in the name of facilities, they have damp basement, dangerously stretched electric wires, closed lift and overall dilapidated building, that too when the registry is still there. It’s a far cry.

This project was started in the year 2011. There were a total of 2000 flats, which were to be completed between 2013 and 2014. But in the year 2017, only a few people could get the flat. The builder took the entire money from the buyers but did not pay the money to the Greater Noida Authority. Therefore, most of the flats could neither be registered nor could there be a permanent system of maintenance. Now the situation is that neither the registry is being done nor the price of the houses is being found here. The houses which were bought for 40 lakhs 10 years ago are not even worth Rs 30 lakhs in the market. This is the reason why the people of this society have come out on the road publicly declaring themselves unhappy. Look at their problems

Living in Radha Sky Garden Society means that the building can collapse at any time. Here you find your own car parking. You can get stuck in the lift at any time and it will be your own responsibility to extinguish it in case of fire. Just like it happened two days ago. Two and a half lakh rupees have been taken from the buyers for parking in the basement of the 14-storey building. But here water is seeping everywhere and power lines are spread. The responsibility of maintenance is with the builder at present and he is proving to be unable to fulfill his responsibility.

A person named Satyaveer Singh told that it was noon from 9.30 in the morning. If the light did not come, then asked what happened. Said it is cut off from NPCL. When I came down in the evening, I came to know that NPCL took it away after cutting the fuse. He did not pay electricity. Where did our money go? The extent is this that the employees engaged in security have to go on strike even for their salary.

Ensure maximum purchase of paddy, farmers should not face any problem- Subhash Barala