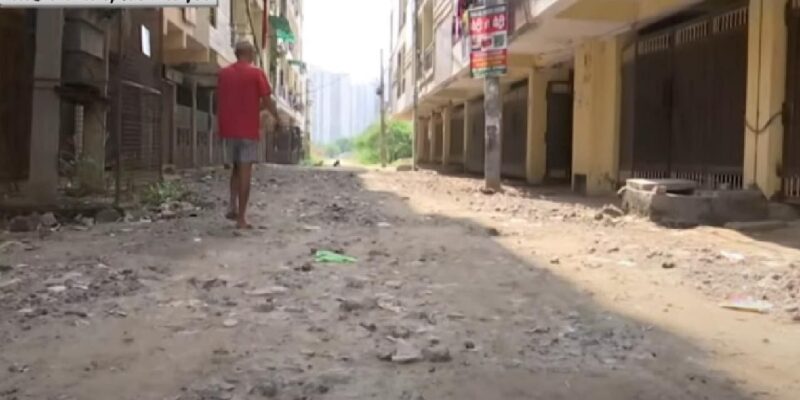 This is the report of Shahberi village of Greater Noida. Here the babus of the authority turned a blind eye to the buildings being erected on their land. The administration earned a lot of money by getting it registered. The builder ran away after selling thousands of flats and an accident revealed that this entire township is illegal, that is, the life of the buyers has been stuck by looting lakhs of rupees here too. You should also look at this report carefully because here the question is of trust in the government and government machinery, from which the country needs to seek answers.

Today’s story of our robbery begins with this public information board, which has five information. First – this land of Shahberi village belongs to the authority. Second – it means that no one can build a building here. Third- This land has been notified in 2013-2014 itself. Fourth- the buildings built here are illegal as well as unsafe and fifth- neither one can buy flats or invest here. Action will be taken for doing so.

The irony is that the people of Shahberi came to know about this then. When 427 buildings were erected. Thousands of flats had been bought. Crores and billions of rupees had been lost. This is the story of Greater Noida West, just 20 km away from the capital of the country, when big builders started building big buildings in this corner of NCR, then builders in nearby Shahberi village started selling small flats by making small flats. . So many people bought flats in Shahberi, but suddenly one day in 2018 everything changed.

On 23 July 2018, a building in Shahberi collapsed in heavy rain. 9 people died after being buried under the rubble of that building. After this, on investigation, it was found that all the buildings in this area are illegal and after that the authority banned all types of construction here. From that day the fate of the people here was also locked. Now neither people are able to leave their flats. Can’t stay

Would these buildings continue to be built if the accident had not happened in Shahberi?

Ashish Kumar Singh booked in 2017. Got possession in 2018. Everything was going well. Then a building collapsed and everything came to a halt. Even if you do the cleaning, the police stop it. Police says we will not allow any work here. Piyush Sharma passed the loan by taking all the fees from the bank. How do I know as a common man that there is a problem with this. Roads are being built where there is no one. We are here but there is no road, that is, it also happens. When a village becomes populated. Thousands of families start living there. Then the authority tells that this land belongs to him and why this happens. Everyone knows this.

After Pandit SK Sharma collapsed the building, the authority started saying that this is the authority’s land. Where will the 25 thousand families here go? You should think about this. People are coming in waist full water. The fundamental right of road drain is being denied. Prempal Sharma said what is the authority, say that if you build a road, then it will say that it is not under us. What is its job? Scramble from all sides.

By the time the authority woke up from sleep, thousands of people had been looted. Not only this, after the accident, when the buildings built here were investigated by IIT. (Overlap the copy of the investigation report) Then it came to know that the builder has handed over such buildings to them, which will fall within ten years. Now this whole area has become a hell of the earth for the people. The building was built on the land of the Gaushala, but when the accident happened in Shahberi, the authority woke up from its sleep. The process of breaking it was started. Broke this pillar. We also asked the officer of Greater Noida Authority on this whole episode, our question was what will happen next? Fixing Responsibility. That process is going on i.e. the authority remained careless about its land for four years and has been fixing the responsibility for three years, but the task itself is so difficult that it is not being completed even in seven years.

Our investigation in this case was not completed yet. We met Harpreet Singh, a lawyer trapped in Shahberi’s robbery, who is also fighting the people’s fight here and he put forth the full side of the buyers before us.

1-Depends on intention. The High Court said that the status quo will remain. At the same time, the farmers sold the land, which is illegal as per the law. Order is running since 2014. Even today it is the same.

2- DM was also a party in that petition, so we cannot even say that we do not know. Fulfilled duty in August 2020, but by then the matter got entangled. We would not have been cheated. The Greater Noida Authority is equally responsible. Surprisingly, there has been ample registry in Shahberi, which comes under the DM only.

The law says that buyers should be aware, like when they buy potatoes, they buy after testing. Similarly, check the condition of the house and buy it, but in our investigation it was found that while buying the flat, the registry of the land was in the name of the builder. Banks offered loan while buying the flat. As soon as the flat was bought, the government also got it registered. So where is the room for doubt? The truth is that the flaw was inside. The system was rotten from inside, which the builder took full advantage of and now it has become impossible for the buyers to treat the merger.

Naga Chaitanya is taking care of himself after breaking up with Samantha, know how to keep busy?