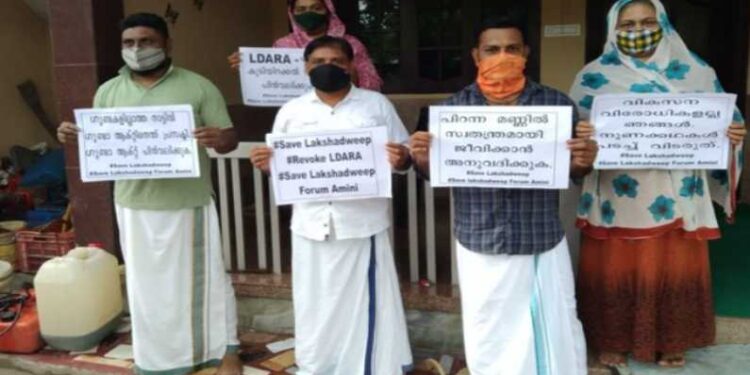 During the strike, a family wrote on their banner, ‘We will not give up on our beautiful Lakshadweep. We will save democracy.

The citizens of the Union Territory of Lakshadweep agitated against the local administration. A 12-hour hunger strike was held on Monday. They allege that the Lakshadweep administration and its administrator Prafulla Khoda Patel are implementing anti-people policies. They fear that the introduction of these new rules will destroy the culture and tradition of Lakshadweep, which is home to around 70,000 residents.

The Save lakshdweep Forum, which organizes the protest against these rules, says that the new proposals that the government is bringing are a threat to our culture, so we are going on a hunger strike in protest against these proposals. Following the COVID protocol, people demonstrated by wearing masks and holding posters by writing slogans condemning the decisions of Administrator Praful Khoda Patel.

‘Won’t give up on the beautiful Lakshadweep’

One family wrote on their banner, ‘We will not give up on our beautiful Lakshadweep. We will save democracy. Adi, who participated in the protest, said, “We want to protect the interests in these islands. The administration is ignoring our demands. Thus, we have participated in these protests.” Another protester said, “We want to ensure peace in Lakshadweep. Thus, we will protest peacefully outside our residences by following the COVID protocol

At the same time, the administration of Lakshadweep Administrator Prafulla Khoda Patel had given a strict warning to take action under the Epidemic Act to prevent crowding in public places. A leader conducting this protest says that such a protest is happening for the first time in Lakshadweep. The administration is adopting a biased attitude with us. We have been repeatedly assured that the sentiments of the local people will be respected, but it is not so. The administration is continuously moving forward on its decisions.

BJP in-charge of Lakshadweep AP Abdullakutty said, “On June 1, a Bharatiya Janata Party (BJP) delegation from Lakshadweep met party chief JP Nadda and Union Home Minister Amit Shah on Monday and discussed the situation in the Union Territory and the concerns of the local people. discussed on. Amit Shah assured the BJP delegation that all the concerns of the local people would be addressed.

The citizens there are seeing their culture in danger due to the proposed rules and this is the reason why the anger of the people is increasing with every day. All the opposition political parties are also targeting the Modi government at the Center regarding these laws. Leaders of opposition parties across the country are demanding the removal of Lakshadweep administrator Praful Patel. For this, all the opposition parties have also written a letter to President Ram Nath Kovind.