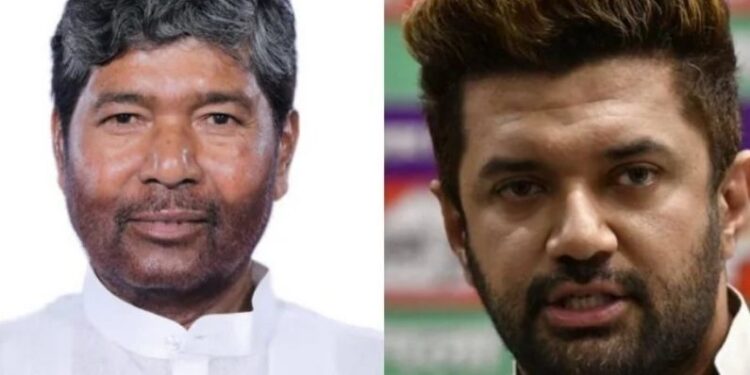 Hajipur MP Pashupati Kumar Paras said, ‘I have not broken the party, but have saved it.’ He said that 99 per cent of LJP workers are unhappy with the party’s fight and poor performance against JDU in the 2020 Bihar Assembly elections under Paswan’s leadership.

Five of the six Lok Janshakti Party (LJP) MPs elected Pashupati Kumar Paras to the post of party leader in the Lok Sabha and replaced LJP chief Chirag Paswan. Meanwhile, after becoming the leader of the LJP parliamentary party in the Lok Sabha, Pashupati Kumar Paras is now preparing to be crowned as the party’s national president. Preparations are being made on behalf of the Paras camp to call a meeting of the LJP’s national executive in Patna this week.

It is being told that a plan is being made to call all the national executives of LJP and the members of the National Executive including Bihar office bearers in the meeting. The meeting of the executive can be organized in Patna. In this, there will be an attempt to make Pashupati Paras the national president instead of Chirag Paswan.

Earlier on Monday evening, the Lok Sabha Secretariat recognized Paras as the leader of the LJP in the House. A day before this, five MPs had informed Lok Sabha Speaker Om Birla about their decision. Paras on Monday lauded Bihar Chief Minister Nitish Kumar, describing him as a good leader and a ‘Vikas Purush’, exposing a major rift in the party as Paras’ nephew Chirag Paswan has been a staunch critic of the JDU president.

Hajipur MP Paras said, ‘I have not broken the party, but have saved it.’ He said that 99 percent of LJP workers are unhappy with the party’s fight and poor performance against JDU in the 2020 Bihar Assembly elections under Paswan’s leadership. Referring to the poor performance in the elections, he said that the LJP was on the verge of collapse. He criticized “anti-social” elements in the party, possibly pointing to a close aide of Paswan. The closeness of that leader to Paswan was knocking many leaders of the party. Paras said his faction will continue to be a part of the BJP-led NDA government and Paswan may also continue to be a part of the organisation.

Chirag Paswan reached uncle Paras’s residence in the national capital to meet him. Paswan’s brother-in-law and MP Prince Raj also lives in this residence. Paswan was not keeping well for some time, he waited in his car for more than 20 minutes, after which he was able to go inside the house and after staying inside the house for more than an hour, he left. gone. He did not speak to the media persons present there. It is believed that neither of the two disgruntled MPs met him. A domestic help told that both the MPs were not present at home when Paswan came.

(with input of news agency language)

read this also- LJP Split: Who is so powerful in Lok Janshakti Party? Whose power in Chirag Paswan or Pashupati Paras