Lemon Man: Put a bar now, earn profit for 30 years, then only farmers have left their jobs worth lakhs of rupees

When Anand returned to the village in the year 2015, he had a field of about three bighas which was lying idle. He improved this field and planted 900 seedless plants of Thai species in it. About 500 quintals of lemon is coming out from them annually.

People of Rae Bareli farmer Anand Mishra (Lemon Man Anand Mishra), about 80 km from Lucknow, the capital of Uttar Pradesh, are known today as Lemon Man. Leaving the job of a manager in a big company, he is not only earning lakhs of rupees from lemon cultivation, he is also training farmers across the country. After leaving the job, he planted seedless saplings of Thai species and then there was no looking back. The state government has also honored him many times.

Anand, a resident of Kachnawa (Post-Dih) village in Rae Bareli, told NewsNCR Hindi over phone that before 2015, he used to work as a manager in a furniture company with an annual package of Rs 11 lakh, but there He didn’t feel like it. After working for about 13 years, he left the job and started farming, but the biggest challenge in front of him is to do this in agriculture which will give good profits.

Did research, then started cultivation of lemon

Anand says that he was attracted towards the cultivation of horticulture from the beginning. For this, he first gathered information about mango cultivation, then did research about guava and banana. He went to Barabanki and understood the cultivation of Mentha. After all this he felt that lemon is such a cultivation towards which farmers are not serious, they are still giving importance to traditional farming. From here he paid attention to the cultivation of lemon and now he has become an example.

When Anand returned to the village in the year 2015, he had a field of about three bighas which was lying idle. He improved this field and planted 900 seedless plants of Thai species in it. Of these, about 800 plants turned out to be true.

These plants became ready in three years and now about 500 quintals of lemon is coming out of them annually. These plants of Thai species produce at least 1000 lemons per tree in a year, which also weighs 40 to 50 grams. There is a lot of juice in it, due to which its demand always remains in the market. 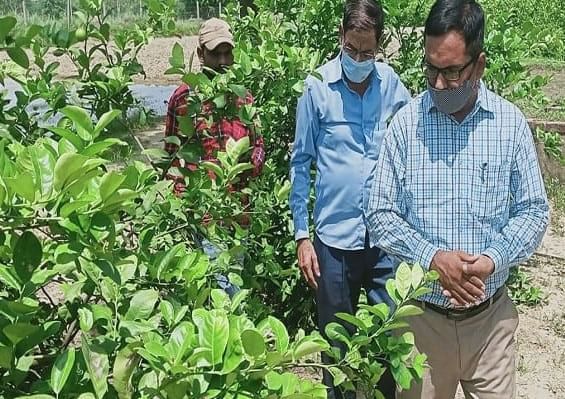 Anand Mishra with farmers in his gardening.

Apply once, make profit for 30 years

Anand explains that lemon is such a crop that you plant it once and then after three years earn profit for 30 years. They say that it costs in the initial days but that too is recovered in a year or two. After this you will only get profit. Its trees and leaves are not eaten by cattle, so it has to be guarded only when it bears fruits.

Government appreciated the work, farmers from all over the country come to take training

Anand has got fame all over the country only after a few years of farming. The Uttar Pradesh government has honored him with the Chaudhary Charan Singh Kisan Samman. Apart from this, he has also been awarded with honors like Janpad Gaurav Samman, Samaj Ratna etc. Farmers from many parts of the country come to see his horticulture located in Rae Bareli and go after learning the nuances of horticulture. Now even government organizations invite Anand as speaker.

Also read- Farmers Alerts: It is only one week for litchi farmers, hurry up or else there will be huge loss