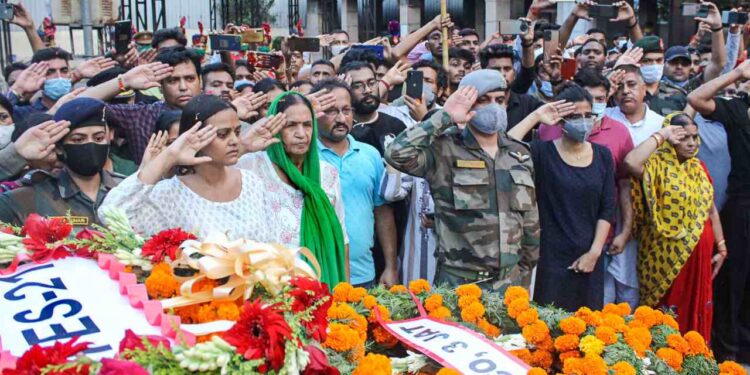 Chief Minister Yogi Adityanath expressed grief on Twitter and announced financial assistance of Rs 50 lakh to the family and job to one of the family members.

Major Mayank Vishnoi of Meerut, who was martyred in Shopian, Jammu and Kashmir, was cremated here on Sunday with full state and military honors. His body reached Shivlokpuri in Kankarkheda, his ancestral residence by road from Hindon Air Force Station on Sunday, from where his last journey reached Surajkund. After this, the martyr Major was given a final farewell with moist eyes amidst full state and military honours.

The body of the army officer was lit by his father Virendra Vishnoi. During this, the martyr’s wife Swati Vishnoi, mother Asha Vishnoi and sisters Anu, Tanu were present.

Chief Minister Yogi Adityanath expressed grief on Twitter and announced financial assistance of Rs 50 lakh to the family and job to one of the family members. He also talked about naming a road in the district after the martyr Major Mayank Vishnoi.

Earlier, the funeral procession started at around five in the evening amidst the crowd gathered for the last glimpse of the martyr. On behalf of the state government, Minister Kapil Dev Agarwal and MP Rajendra Aggarwal attended.

martyrs during encounter with terrorists

The body of Major Mayank was brought from Udhampur in Jammu and Kashmir to Hindon Air Force Station in Ghaziabad on Sunday morning. From here, it was brought to his ancestral residence in Shivlokpuri, Kankarkheda in Meerut at around 4 pm by a special army vehicle, where army, police and administration officials including MP Rajendra Agarwal paid tribute to him.

Major Mayank (30) was posted in the Rashtriya Rifles in Shopian, Jammu and Kashmir. According to the family members, he was shot in the head while encountering the terrorists. He was undergoing treatment at the Military Hospital in Udhampur since August 27. He breathed his last in the early hours of Saturday.

Also read- Major Mayank Vishnoi of Meerut, who was martyred for the country, was injured 16 days ago in Shopian encounter

Also read- The man drove a dozen people and drove the bike, watching the video, people said – ‘Don’t be afraid of challan but from Yamraj’