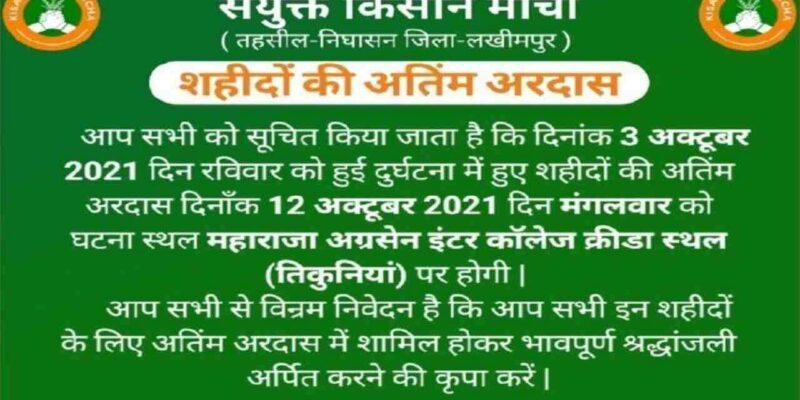 Lakhimpur Kheri of Uttar Pradesh (Lakhimpur violence) In K. Tikunia case, on 12th, the deceased farmers have decided to do Ardas. For this, the United Kisan Morcha has issued posters and after the release of the posters, the difficulties from the district administration to the government have increased. It is believed that farmers may be angry about the government. At the same time, the government believes that political parties can also instigate people against the government by joining this Ardas.

Actually Lakhimpur Kheri (Lakhimpur violence) BKU leader Rakesh Tikait has given an ultimatum to the country and the state government regarding the Tikunia incident. Now its countdown has started. Tikait had warned that Union Minister of State for Home Ajay Kumar Mishra Teni should be sacked till the joint prayer meeting of the farmers killed in the conflict. Not only this, there was a demand to arrest his son. The Morcha threatened to launch a movement across the country if this demand was not met.

The date has also been announced by the United Kisan Morcha regarding Ardas. There has been a stir in this from the administration to the district administration, because on October 12, joint Ardas is to be held and the main accused is still away from the police.

In fact, there is a lot of tension not only in the district but also in the state due to the violent uproar in Tikunia of Lakhimpur. Regarding the incident, Rakesh Tikait, president of the Bharatiya Kisan Union had said that the joint funeral prayer of the four deceased farmers would be held at the same place. The decision of which will be taken by the United Kisan Morcha. Eight people died in this violence. In which four farmers, three BJP workers and a journalist were involved.

On the other hand, the United Kisan Morcha has warned that if the dismissal of the Minister of State for Home and the arrest of the minister’s son Ashish Mishra is not done, then a nationwide agitation should be started. Along with this, the United Front has declared the date of Joint Final Ardas on 12 October and Ardas will be done in the ground of Maharaja Agrasen Inter College. For this, the front has released posters.

Lakhimpur Kheri Violence: What is Ashish’s role in Lakhimpur violence? These allegations have been made in the FIR

NEET PG 2021 Scorecard: NEET PG score card will be released today, you will be able to check this way

Confusion about which ITR form to fill? Know their details