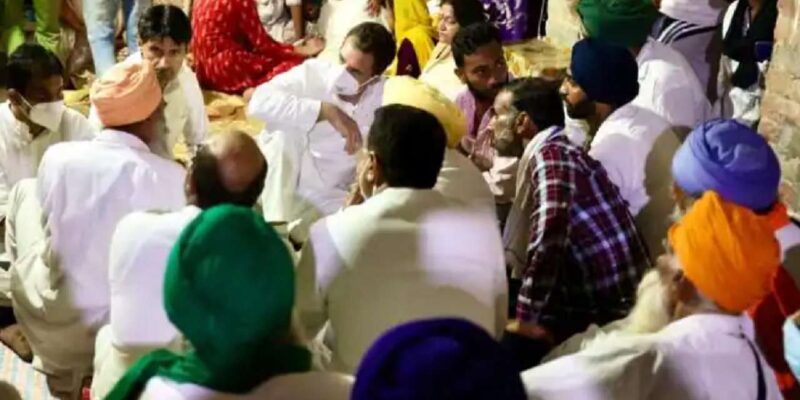 After being under house arrest in Sitapur for two days, Congress General Secretary Priyanka Gandhi and Congress leader Rahul Gandhi finally met the families of those killed in the Lakhimpur Kheri violence late on Wednesday at their homes. Went. Priyanka and Rahul reached Chaukhra Farm at the house of Lovepreet who was killed in Tikunia ruckus. Both met Lovepreet’s family members and assured them of justice.

After this both of them went to the house of deceased journalist Raman Kashyap in Nighasan. Raman Kashyap’s family has demanded from Priyanka Gandhi the dismissal of Union Minister of State for Home Ajay Mishra Teni and the arrest of her son Ashish Mishra.

Priyanka Gandhi and Rahul Gandhi reached Lovepreet’s house amidst tight security around 9.30 pm. There was a gathering of media at Lovepreet’s house. But both did not talk to anyone. and went straight to his house. After talking to the family members of Lovepreet, both took complete information about the incident and assured justice. The siblings stayed at Lovepreet’s house for about twenty minutes. After which he left from there.

After leaving Lovepreet’s house, Priyanka and Rahul Gandhi reached Nighasan at the house of deceased journalist Raman Kashyap and took information about the incident after talking to his family members. At around 10:38 pm, Rahul-Priyanka went inside the house and talked with the family. Raman’s father Ram Dulare, Raman’s wife Aradhana, brother Pawan Kashyap were present at that time. After talking to the family for about 22 minutes, assured them of justice.

After that Rahul-Priyanka reached Lahbri village to meet the relatives of the deceased farmer Nachhatar Singh. Rahul and Priyanka Gandhi stayed here for about 38 minutes. During this, he drank water and tea at home. Rahul and Priyanka became emotional after meeting Nachhatar Singh’s elderly wife Satwinder Kaur. Priyanka Gandhi assured Satwinder Kaur and said that we are also like your child. Justice will be served.

These families don’t want compensation, they want justice. It can’t be possible unless he (Ajay Mishra Teni) resigns as MoS Home. Impartial probe not possible under him.If they can arrest us without FIR, why can’t they arrest him(Ashish Mishra): Priyanka Gandhi Vadra in Dhaurehra pic.twitter.com/g4EfcmZsLp

When Priyanka came out of the house after meeting Nachhatar Singh’s family, she said while talking to the media, we have met three families of the victims, all have clearly said that they are not satisfied with just compensation. They want justice. And justice will come only when the accused are arrested. And Ajay Mishra Teni will resign from his post. Priyanka said that when the police can arrest me without a warrant, then why are those who are facing charges not being arrested.

Sachin Pilot not to be given

Moradabad police, administration didn’t give us permission to go further (to Lakhimpur). No reason specified…We were stopped here. Neither are they letting us go nor are they permitting us to stay here…They will drop us back to the border: Congres leader Sachin Pilot pic.twitter.com/8fLqXttc9f

Let us inform that during this time Chhattisgarh CM Bhupesh Baghel, Punjab CM Charanjit Singh Channi, Randeep Surjewala, Ajay Kumar Lallu were present with him. At the same time, Sachin Pilot was stopped by the police in Moradabad. After which Sachin Pilot said that Moradabad Police, Administration has not given us permission to go further to Lakhimpur. No reason has been specified for not granting permission. That’s what stopped us. Neither they are letting us go nor are they letting us stay here. They are talking about dropping us back at the border.

Also read- ‘This night of cruelty will surely dawn,’ said Rahul Gandhi after meeting the victim’s family in Lakhimpur Kheri

Also read- Lakhimpur Kheri became political epicenter of UP, know what is the situation from Sitapur-Lucknow to Delhi?

IND W vs AUS W: Team India’s eyes on winning T20 series after amazing in Test, increased strength due to the arrival of Harmanpreet