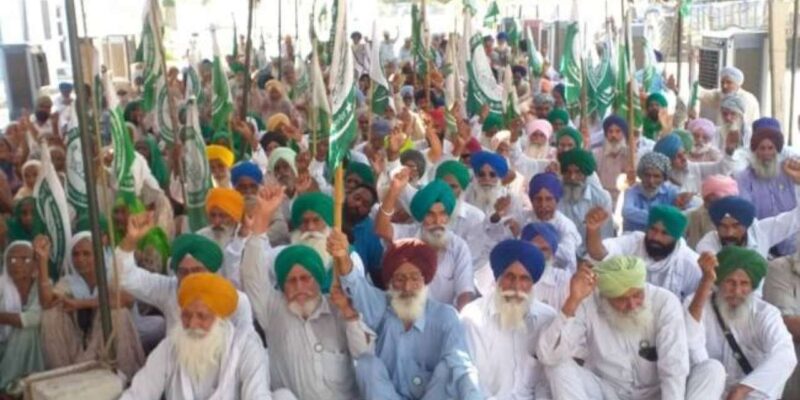 Farmers opposing all the three agricultural laws will celebrate ‘Martyr Kisan Diwas’ in memory of the farmers who lost their lives in Lakhimpur Kheri Violence today. On this occasion, the United Kisan Morcha (SKM) will also pay tribute to the farmers. The martyrs of Lakhimpur Kheri massacre will be ‘last ardas’ at Sahebzada Inter College in Tikunia.

Preparations are being made for this and thousands of farmers are expected to attend this prayer meeting. The United Kisan Morcha urged people to light five candles outside their homes at 8 pm on Tuesday. The organization has expressed its disappointment over the lack of action against BJP MP Ajay Mishra and has demanded his sacking. Innocent people died due to being hit by speeding vehicles. On October 15, Dussehra will be celebrated by farmers organizations by burning effigies of BJP leaders.

Thousands of farmers across the country have been camping at Delhi’s borders since November last year, demanding the repeal of three agriculture laws that they claim will do away with the Minimum Support Price (MSP) system, allowing them to be used by large corporations. will be left at the mercy of. Several rounds of talks with the government have failed to break the deadlock between the two sides.

The three coalition parties of Maharashtra government, Congress, NCP and Shiv Sena called for a state-wide bandh on Monday in support of the farmers killed in the incident of violence in Lakhimpur Kheri, Uttar Pradesh. The three parties jointly protested the incident. Chhatrapati Shivaji Market Yard Traders Association also supported this bandh. He says that the markets of Fudge-Vegetable, Onion, Potato will be completely closed on Monday. The merchant organization had appealed to all the traders to keep their shops closed on Monday. He also appealed to the farmers not to bring their produce to the cities on Monday. However, essential services will continue during this period. The Kisan Sabha had supported this bandh. The organization had said that its workers in 21 districts are coordinating with like-minded organizations to make the bandh a success.

Also read- Delhi Air Quality: Air is getting toxic once again in Delhi-NCR, AQI likely to fall in ‘poor’ category in next three days

What is Gatishakti National Master Plan which will be launched by PM Modi, ‘Make in India’ products will get a boost