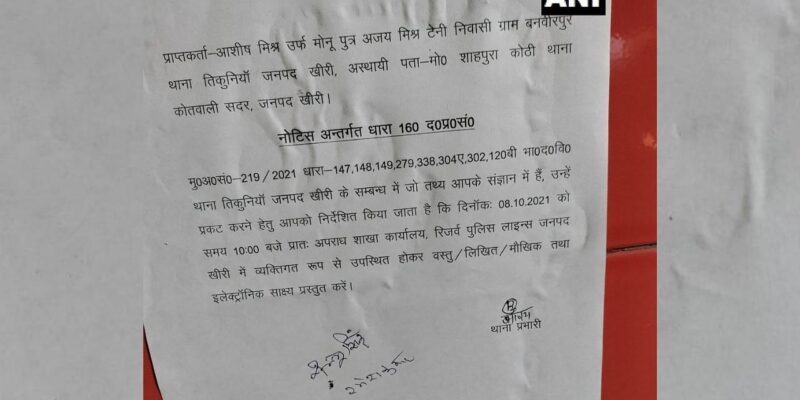 On the notice pasted outside the house of the Union Minister, it is written, ‘Under sections 147, 148, 149, 279,338, 304A, 302 and 120B of the Indian Penal Code, present the facts which are in your notice with respect to the police station Tikunia district Kheer. You are directed to present evidence by personally reaching the Crime Branch Office, Reserve Police Lines at 10 am on October 8.

Uttar Pradesh Police pastes notice outside the residence of Union Minister Ajay Kumar Mishra in Lakhimpur Kheri, asking his son Ashish Mishra to appear before it on Oct 8 in connection with the violence pic.twitter.com/HR7sm1b2K7

On Sunday, farmers protesting against agricultural laws were trampled by a car in Lakhimpur. Union Minister’s son Ashish Mishra is the main accused in this case. According to the Bharatiya Kisan Union, Ashish had trampled the protesting farmers. After this incident, violence erupted in Lakhimpur Kheri. A total of eight people, including four farmers, died in the violence. Ashish is absconding since then.

After the incident, it was said by the Uttar Pradesh administration that it would find the culprits of the incident as soon as possible and strict action would be taken against them. Uttar Pradesh Police is continuously taking action in this matter. On Thursday, the police arrested two accused Lavkush and Ashish Pandey in the Lakhimpur Kheri violence case.

Many leaders reaching to meet the victims, demanding the arrest of the son of the Union Minister

read this also: Agreement between Saharanpur administration and Navjot Singh Sidhu, delegation of 25 leaders will go to Lakhimpur under police supervision

Former US NSA lashed out at Imran, Taliban’s ‘supporter’, said- ‘Pakistani leadership should be isolated internationally’