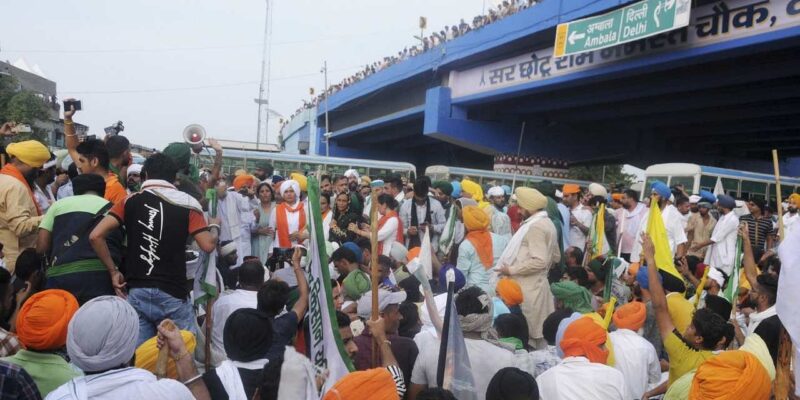 Demonstration of farmers regarding the incident in Lakhimpur Kheri.

The fire of the incident with farmers in Lakhimpur Kheri district of Uttar Pradesh has spread to Uttarakhand as well. Now farmers in the state protested fiercely in the cities of Bajpur, Kashipur, Rudrapur, Kichha etc. Raising slogans against the Center and the UP government, he demanded action against the culprits. During this, the farmers alleged that the BJP government has killed democracy.

In fact, on the developments with the farmers, the Kisan Union demanded a compensation of Rs 1 crore each to the families of the deceased farmers. During this, a batch of farmers left for the spot in Lakhimpur. At the same time, farmer leader Pritam Singh Sandhu, who left for Lakhimpur, said that the defenders of democracy have brutally killed the farmers, which is sad for the whole country. In such a situation, justice will be demanded for the families of the victims. After the protest, the farmers marched to Rudrapur. Angry farmers said that the fight for the rights of farmers will continue.

It is worth noting that the farmers are very angry with the incident that happened in Lakhimpur Kheri on the previous day. Due to this, farmers had completely blocked the traffic by jamming at Bhagat Singh Chowk, Doraha, UP border etc. of Bajpur late last evening and registered their protest. On Monday, on the call of United Kisan Morcha, hundreds of farmers under the leadership of BKU state president Karma Singh Padda have left from Bajpur to Lakhimpur Kheri.

A large number of farmers from Kashipur leave for Rudrapur Collectorate

Let us inform that the farmers, aggrieved by the incident in Lakhimpur Kheri with the farmers, left for an indefinite siege of the collectorate located at the district headquarters on Monday morning. During this, the agitated farmers said that the incident was condemnable and condemned the BJP government in strong words. Along with this, the farmers announced to strongly oppose the BJP’s rallies. At the same time, on Monday morning, hundreds of Indian Farmers Union (Youth) gathered in the New Grain Market Complex on Moradabad Road under the leadership of State President Jitendra Singh Jitu and BKYU District Vice President Kalyan Singh Dhillon.

At the same time, in Rudrapur, in protest against the atrocities on the farmers in Lakhimpur by the Congress Committee, anger was expressed by burning effigies at Bata Chowk. During this, the state working president Tilakraj Behad said that the farmers were brutally driven by the son of BJP’s Union Minister, due to which 5 farmers died on the spot and more than 1 dozen farmers were seriously injured. Who are being treated in many hospitals.

read this also: Uttarakhand government reached the court to remove the limit on the number of pilgrims for Chardham Yatra

What is ‘business drinking’ that has created a ruckus in China? Controversy erupted after Alibaba manager was accused of rape

Egg and chicken food became cheaper after one and a half year, due to this fall in prices