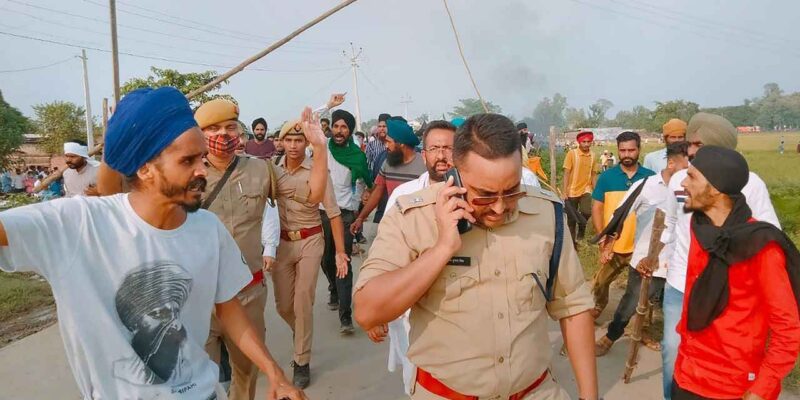 For the last five days, Lakhimpur Kheri of UP is being discussed all over the country. People want to know who is the culprit behind the death of 8 people? 4 Who was driving the car that crushed the farmers? And there is a political ruckus in UP that when will the accused named in this case be arrested?

Meanwhile, the hearing of Lakhimpur Kheri violence was held in the Supreme Court of the country today, in which the Supreme Court sought a status report from the Uttar Pradesh government regarding FIR, accused and arrest. During this hearing, Chief Justice NV Ramana said that two lawyers had written a letter two days ago. One of them was Shiv Kumar Tripathi. We directed the Registry to register it as PIL but due to misunderstanding it was suo motu. So today it was heard. Now let us show you what were the main points of hearing in the Chief Justice’s Bench.

The Chief Justice asked the lawyer who filed the application – what kind of relief do you want? On this Shivkumar Tripathi said- You please instruct the Ministry of Home Affairs and the state to investigate the incident. Further, Assistant Advocate General Garima Prasad said – SIT and judicial inquiry commission have been formed. FIR has been registered. To this the CJI said- The complaint is that you are not looking into the matter properly and the FIR was not registered properly. What are the details of the commission?

The Assistant Advocate General said that it is being led by a retired High Court judge. The Chief Justice said- What is the status of the PIL pending before the High Court. Garima Prasad said- I can present it tomorrow after getting the details. CJI said – tell tomorrow what happened in the High Court?

The Chief Justice also read out the message received from lawyer Amritpal during the hearing. In which it was written – The mother of the slain Lovepreet Singh is critical. After this, Justice Surya Kant said – get him admitted to a nearby hospital. Let us know about it tomorrow. The matter will be heard again tomorrow i.e. on October 8.

In fact, UP Governor Anandiben Patel ordered the formation of a one-man judicial commission that was talked about in the Supreme Court. Under this order, retired High Court judge Pradeep Kumar will conduct a judicial inquiry into the Lakhimpur case and submit the report in two months. Today another big news came about Lucknow incident..

Forensic team got 2 live cartridges from chance-e-incident. It is said that two cartridges of 315 bore were found near the burnt Thar jeep. Meaning the police are getting physical evidence on the fifth day of the violence. IG Laxmi Singh is also saying that evidence is being collected during the investigation. Two accused have been arrested after interrogation. The named accused Ashish Mishra has also been summoned for questioning.

In the Lakhimpur Kheri case, the government administration is continuously claiming investigation in the right direction. But many political parties are not trusting them. Therefore, from UP to many states, there has been a Mahabharata about this issue.
Five days passed but it was not known who ran the bloody car in Tikunia on 3rd October. Was Ashish Mishra, son of Union Minister of State for Home Ajay Mishra sitting in the car? The question is also whether the car was deliberately mounted on the farmers?

However, the videos that are coming about the Lakhimpur incident. They are pointing out that the farmers were forcibly driven over. And this new video is also giving strength to this theory.

This video looks the same in a one-time viewing. As it was viral from three days ago. But this 46 second video is different. In this the event is more clearly visible. However, let us tell once again – NewsNCR does not confirm the veracity of this video.

What’s in the video?

In the beginning of this video, it is seen that farmers are demonstrating peacefully on the road. Proceeding with black flags. But after two seconds, a speeding Thar jeep playing hooter comes from behind and hits the protesting farmers hard. The trampling goes on. Whose voice is clearly heard.

If you watch the video carefully, then in just three seconds, the whole scene changes here. When the Thar passes, people are seen lying bloody on the roadside. At the rear of the Thar vehicle comes a throbbing black Fortuner car followed by a white colored Scorpio.

Let us tell you that BJP MP Varun Gandhi also tweeted this video of Lakhimpur violence and wrote, the video is very clear. Those who protest cannot be silenced by killing them. The accountability of those who shed the blood of farmers should be fixed.

So on one hand the argument is that the video is more clear. At the same time, the claim of the administration is that the investigation is transparent like glass. But questions are being raised on the Action of Investigation. Because on Sunday, the police did not collect physical evidence from the incident site. Even on Monday, farmers continued to protest with dead bodies nearby. There was continuous movement throughout the scene. People kept taking pictures of burnt vehicles. The way the incident was recreated at around 11.30 pm on Tuesday night. That too is under suspicion and questions. In such a situation, the question is also arising whether the UP Police has not been able to run even a quarter of a century in five days.

The experts are even telling that it may be that the entire investigation of Lakhimpur will be limited to the statements of the eyewitnesses, interrogation of the accused and victims and all the videos that are coming out.. But what is becoming clear in this new video. That on October 3, the killer vehicles trampled the farmers at unbridled speed. Although it is difficult to say here that what happened there before or after this video? And this is the subject of investigation.

Father put his own 6-year-old son to death, then sprinkled vermilion and gulal on the dead body to make the murder look like a human sacrifice

Ravi Dahiya did a ramp walk at Lakme Fashion Week, the new avatar of the player is special