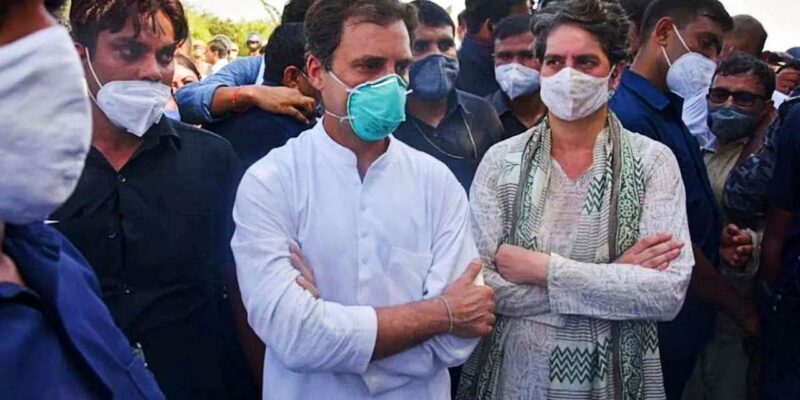 Let us inform that Rahul Gandhi, who arrived at Lucknow airport to go to Lakhimpur Kheri, sat on a dharna in the airport premises in protest against not being allowed to go by his vehicle. During this, Rahul also had an argument with the officials. However, the matter was resolved in no time and they left for Sitapur. Rahul wanted to go to Sitapur and Lakhimpur by his car but the administration was adamant on taking it by his own car. Amidst the uproar at the airport, Rahul alleged that these people want to forcefully take them by their car, while I want to go by my car, these people are bullying.

Rahul started a sit-in at the airport and was accompanied by Chhattisgarh CM Bhupesh Baghel and Punjab CM Charanjit Singh Channi. Rahul had made it clear that he would not go by the police car as he was not sure where they would take him. Rahul was adamant that he would go to Sitapur and then Lakhimpur Kheri by his own car. Rahul told reporters that how have I been given permission that the police is not allowing me to go out of the airport. After all, under which law is the government deciding how I will go?

After a lot of struggle, Rahul got permission to go to Lakhimpur

Let us inform that after a lot of struggle, the Yogi government on Wednesday afternoon allowed Congress leaders Rahul Gandhi and Priyanka Gandhi to go to Lakhimpur along with 2 others. Priyanka Gandhi has also been released from the temporary jail of Sitapur. Rahul went from Lucknow airport to Sitapur from where he along with Priyanka left for Lakhimpur to meet the suffering farmer families. Priyanka Gandhi was detained on Sunday night on her way to Lakhimpur and was arrested 36 hours later on Tuesday.

‘There is no rift in the Grand Alliance, there is a split in the NDA,’ RJD state president Jagdanand Singh gave this argument …