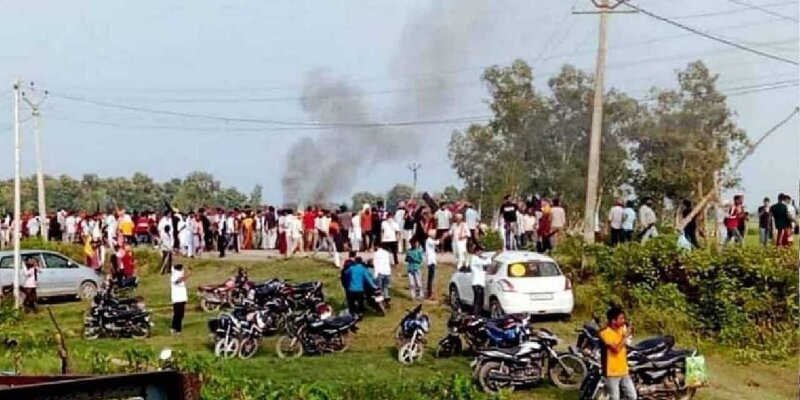 The All India Congress Committee has issued a notice demanding action against the accused in the Lakhimpur Kheri violent incident and the resignation of the Union Minister of State for Home. It has been said that the Congress party will protest by observing a fast of silence from 10 am to 1 pm on October 11. All the PCC presidents have been asked to protest by observing silence outside the Raj Bhavan or central government offices in the state during this period.

All the state units have been asked to ensure the participation of senior leaders, MPs, MLAs and heads of forward organizations and departments in these programs. The Congress will demand the arrest of all the accused related to the Lakhimpur Kheri violence and the sacking of Ajay Mishra from the post of minister through a ‘maun vrat’. Significantly, eight people, including four farmers, were killed in the violence during the protest against the visit of Deputy Chief Minister Keshav Prasad Maurya on Sunday in Tikonia area of ​​Lakhimpur Kheri district. In this case, a case has been registered against many people including Ashish, son of Union Minister of State for Home Ajay Mishra.

Mahapanchayat in Lucknow on 28 October

On Saturday, Youth Congress workers protested in New Delhi and clashed with Delhi Police. The Samyukta Kisan Morcha, a forum of agricultural unions, said farmers from different states would reach Lakhimpur Kheri on October 12 and condole the death of four farmers and a journalist who were killed in the incident. The farmers’ union will also stop the movement of trains on October 18 and there is also a plan to hold a mahapanchayat on October 28.

Congress leader Pawan Khera said in a press meet on Saturday, ‘The journey of democracy from Gorakhpur to Lakhimpur shows that the power of the government applies only to the poor. When it comes to powerful people, the government gets on its knees. He further said, how can we expect the Prime Minister that all his ministers follow Raj Dharma while he himself as the Chief Minister of Gujarat had ignored the advice of the then Prime Minister Atal Bihari Vajpayee. The same PM had written a letter to the Chief Secretary of Uttar Pradesh against this person, who is now the Minister of State for Home. On the other hand, let us tell you that on Saturday, Ashish Mishra, son of the Union Minister, appeared before the Crime Branch. At the same time, according to information received from sources, Ashish Mishra has failed to give proof of his whereabouts in Lakhimpur Kheri on 3 October.

The female mayor was called ‘Mr. Mayor’, Biden stuttered while speaking as the Senate President, while giving the speech, the US President made a mistake many times

Ongoing training of village development works and completion of Nirmal Gram Yatra, these 3 works of Piplantri village were most appreciated