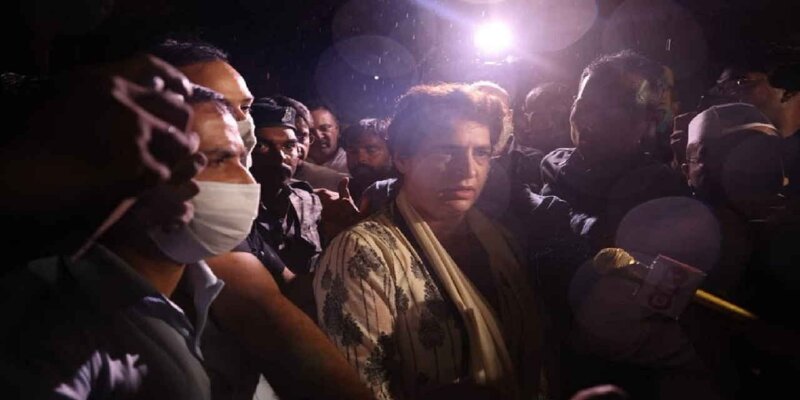 Eight people, including four farmers, were killed in the violence that broke out in Tikonia area of ​​Lakhimpur Kheri district on Sunday against Deputy Chief Minister Keshav Prasad Maurya’s visit to the native village of Union Minister of State for Home Ajay Mishra.

Congress leader Priyanka Gandhi has been placed under house arrest in Sitapur, Uttar Pradesh. Meanwhile, on Tuesday, she has addressed the supporters standing outside the PAC guest house via phone and has promised Congress workers that she will meet everyone after her release. Simultaneously, he raised the demand for the resignation of Union Minister of State for Home Ajay Mishra.

While addressing the people, Priyanka Gandhi said, ‘You understand that there is a farmer, everyone is there, even today only the son of a farmer loses his life for the country, we call him a martyr. Today there is such a cowardly government whose home minister scares the public, his son crushes him with a car, puts the entire administration to stop a woman leader of the opposition, Modi ji, where are your morals?’

He said, ‘There is an old verse, it is the duty of the king to protect the people, Modi ji had come to celebrate Amritotsav, 100 km away, but did not reach Lakhimpur-Khiri to ask for the tears of the farmers. The more you suppress me, the stronger we will be. Let me tell the Congress colleagues that the struggle will go on till the resignation of the Minister of State for Home and the arrest of his son, I will meet you after my release.

A case has been registered against 11 leaders including Priyanka Gandhi Vadra, Deepender Hooda and state Congress President Ajay Kumar Lallu under the Code of Criminal Procedure. As Congress raised questions over the custody of Priyanka Gandhi Vadra, officials on Tuesday said that a case has been registered against her and 10 others here under sections related to preventive detention for apprehension of breach of peace.

Sitapur Deputy District Magistrate (SDM) Pyare Lal Maurya said on Tuesday that a case has been registered against 11 leaders, including Congress leader Priyanka Gandhi, on October 4 under sections 144, 151, 107 and 116 of CrPC. The SDM said, ‘These are preventive clauses, once we get assurance that there will be no peace violation by them, then it will be removed.’ SDM Sitapur said that apart from Priyanka Gandhi, Deependra Hooda and Ajay Kumar Lallu, the names of Sandeep, Raj Kumar, Deepak Singh, Narendra Shekhawat, Yogendra, Harikant, Dheeraj Gurjar and Amit are included. All these people have been kept in different rooms in the 2nd Battalion PAC Guest House here.

Priyanka Gandhi Vadra, the national general secretary of Congress and in-charge of Uttar Pradesh, who was detained in Sitapur on the way to meet the victims of Lakhimpur Kheri incident, is still in police custody. Priyanka, along with her fellow leaders, had left for Lakhimpur Kheri in the early hours of Monday to meet the relatives of the deceased farmers, but was taken into custody at Sitapur on the way. Eight people, including four farmers, were killed in the violence that broke out in Tikonia area of ​​Lakhimpur Kheri district on Sunday against Deputy Chief Minister Keshav Prasad Maurya’s visit to the native village of Union Minister of State for Home Ajay Mishra. A case has been registered against many people including Mishra’s son Ashish in this case.