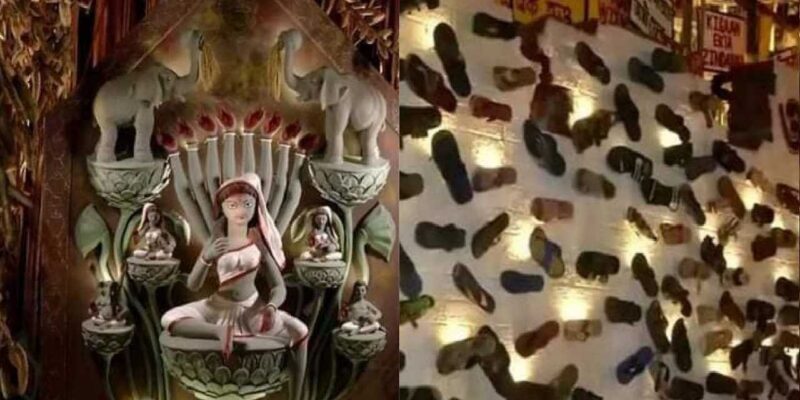 Photo: Maa Durga and the footwear used for decoration at the pandal of Dum Dum Park Bharat Chakra Puja Committee.

A Durga Puja pandal in Dum Dum area of ​​Kolkata (Durga Puja Pandal) BJP for allegedly making decorations with shoes (BJP) has expressed strong objection. Leader of Opposition in the Legislative Assembly Shubhendu Adhikari (Suvendu Adhikari) has requested the Chief Secretary of the state to intervene in the matter and get it removed. However, the organizers have rejected BJP’s objection to the decoration of the pandal. Let us tell you that the Durga Puja pandal made by the Bharat Chakra Club in Dum Dum Park has been decorated on the theme of the farmers’ movement and has been decorated with shoes and slippers for its decoration.

This pandal has gained a lot of popularity due to the making of Durga Puja pandal on the theme of farmers’ movement and now a controversy has arisen due to the use of shoes and slippers in the decoration of the puja pandal, although the organizers are putting aside the dispute and putting their side. An advocate has also given a legal notice regarding this puja pandal built on the theme of the farmers’ movement.

A Durga Puja pandal in Dumdum Park has been decorated with shoes.
This heinous act of insulting Maa Durga in the name of “Artistic liberty” won’t be tolerated.
I urge the Chief & Home Secretary egiye_bangla to intervene & compel the organizers to remove the shoes before Shashti. pic.twitter.com/h3uQPbNIpS

Leader of Opposition in the Assembly and senior BJP MLA Shubhendu Adhikari has also raised objections. He called it an insult to Hindu faith and demanded immediate intervention of the state chief and home secretary in the matter and remove the slippers before Shashthi. He posted the picture of the shoes and slippers decorated in the pandal on Twitter on Saturday. It reads, “Pooja pandal in Dum Dum Park is decorated with shoes. This heinous act of insulting Maa Durga in the name of ‘artistic freedom’ will not be tolerated. I urge the Chief and Home Secretary to intervene and force the organizers to remove the shoes before Shashthi. Former Meghalaya Governor and senior BJP leader Tathagata Roy has told reporters that everything cannot be tolerated in the name of freedom of art. This is a serious insult to Goddess Durga and hurts our religious sentiments.

‘Shoes are the symbol of farmers’ movement’, the organizers clarified

On the other hand, the organizers of the Dum Dum Park Puja Pandal have denied the allegations of the BJP leader. He has said that a road leading to the pandal has been decorated with shoes, it is a symbol of the farmers’ movement in the country. Durga idol has been installed far away from it and a heap of paddy has been planted around it. Giving clarification, an official of Dum Dum Park Bharat Chakra Puja Committee said that the decoration of shoes has been done far away from the pandal. Kisan Andolan is our theme and it has been done on the road leading to the pandal. Through this, the lathi charge on the agitating farmers has been shown. Due to the lathi charge, the farmers had to run away leaving their shoes and slippers in a rage. Such scenes were seen recently.

The size of your lips tells about your personality, know