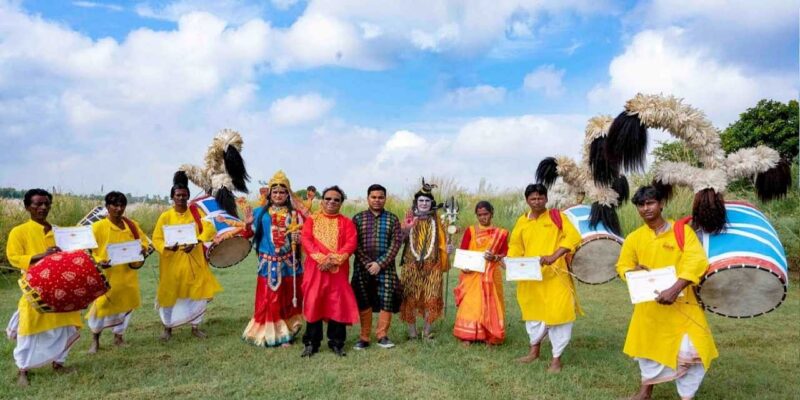 With the beginning of Durgotsav, various puja pandals of Bengal (Durga Puja Pandal) The beats of the dhaka are starting to resonate. Along with the worship, the voices of Dhak are also being heard in every puja pandal. Let us tell you that different instruments are dedicated to the worship of different gods and goddesses. Under this, during Durgotsav, Maa Durga (He’s got Durga) during special rituals for the worship of Dhak (Dhak) is played. There will be worship rituals in different stages on the 9 days of Navratri and the beats of the traditional musical instrument ‘Dhak’ will fill the colors of reverence in this festival. Before the start of Durga Puja, Dhakis were felicitated on the occasion of Khukmani Sanstha’s fiftieth anniversary and a music video was launched under the direction of Pandit Pradyut Mukherjee.

The Dhaki team from Bengal has started arriving in various pavilions. Maa’s call will be on various beats of Dhak and it will be played continuously till her departure. The special thing is that Dhakis practice the rhythmic rhythm of Dhak regularly for a year. Maa Durga is a symbol of power. That’s why Dhak players i.e. ‘Dhaki’ play this instrument with their full physical ability and devotees welcome the mother to the tune of Dhak.

Maa Durga is welcomed with the beat of Dhak

Puja rituals are performed on different rhythms of Dhak on every day of Navratri. Durga Puja begins with the arrival worship ritual. In this the mother is welcomed. This is followed by rituals like Shardiya, Navpatrika, Varan, Bodhan, Sandhi Puja, Navami, Udhav and Visarjan on different days. Different rhythms of Dhak are played in all these worship rituals. The beats of Dhak inspire celebration, devotion and unity. This is the reason why Dhakis practice playing Dhak fiercely in the free time they get before the Puja. He said that the practice of playing Dhak starts three months before the date of worship.

The sound of the dhaak, conch shell and bronze utensils of Bengal is the cultural identity of Bengal. Dhaki Paresh Das, Anil Das, Manojit Das, Sunil Das, Shyamal Das were involved in making music. At the same time, Jyotsna Thandar was blowing the conch. Subal Das Bairag (Shiva) and Dhaneshwar Das Bairag (Durga) remained. Everyone was honored by Aritra Roy Chowdhury on this occasion. At the same time, a music video album was made about Dhak players under the music direction of Zima Award winner Pandit Pradyut Mukherjee. Pandit Pradyut Mukherjee said there was a long-standing desire to work with Dhakis and what could have been better before Durga Puja. During the Corona period, they have faced a lot of problems. He has dedicated this tune to him. The music video album Mahalaya was released on the day. The entire video has been planned by Sudipta Chanda. The video has been directed by Soumyadeep Sarkar and Arun Halder.