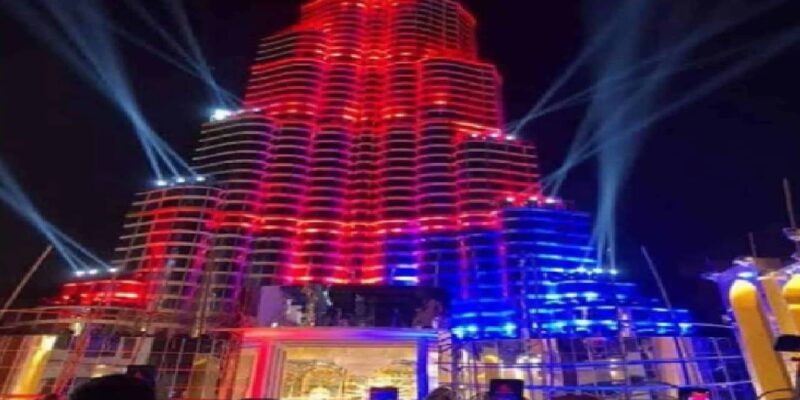 Photo: Puja pandal built on the lines of Burj Khalifa in Kolkata.

Durga Puja Pandal, built in Kolkata on the lines of Burj Khalifa, the world’s tallest building, organized a laser show in view of the fears of the spread of COVID-19 (Coronavirus) due to the huge crowd coming here. ) was cancelled. However, some reports also said that it was canceled after some pilots complained of visual disturbances due to it.

The organizers of this puja pandal located close to the Dum Dum airport claimed that this step was taken in view of COVID-19 due to the large gathering of people. State minister Sujit Bose is one of the office bearers of the Durga Puja committee. Divyanshu Goswami, one of the organizers, said that the laser show on Tuesday evening had to be canceled as the crowd was not taking the name of moving ahead and was standing in the way of the pandal. This created a security problem related to COVID-19.

A 150 feet pandal has been prepared on the model of Burj Khalifa, the 828 meter high building of Dubai and a large number of people are coming to see it. The laser show was suspended in consultation with the state police and administration. Some reports said that the pandal is located a few kilometers away from Netaji Subhas Chandra Bose International Airport and the place falls in the trajectory of aircraft.

Pandal prepared with the help of 6 thousand acrylic sheets

This pandal is 150 feet high. It has been made with the help of 6,000 acrylic sheets. The lighting of the pandal has been done in such a way that it remains the center of attraction across the city. More than 250 laborers have prepared it after working hard for three and a half months day and night. At night, 300 different types of lights are scattered in the pavilion. The pictures of the pandal are also becoming very viral on social media.

State Fire Minister Sujit Bose said that like previous years, the organizers have decorated the idol of Goddess Durga with 45 kg gold this time too. Bose is one of the office bearers of Durga Puja Committee. He told that last year the pandal here was built on the lines of Kedarnath temple.

Conflict between Imran Khan and Army Chief Bajwa, ruckus over the appointment of new ISI chief, what did the Pakistan government say on this?