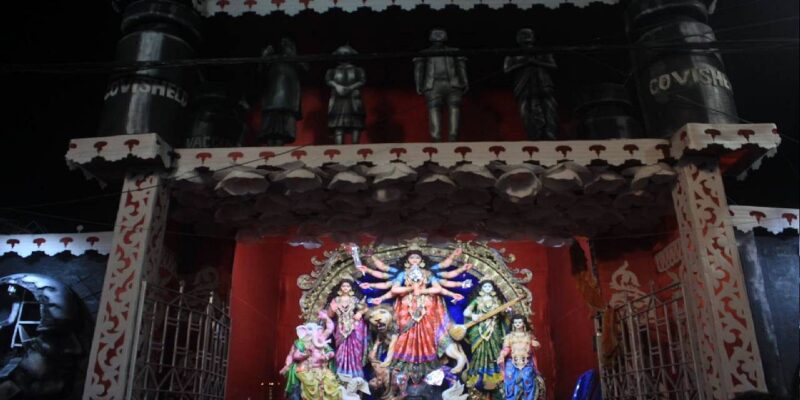 Photo: The theme of Corona Vaccine has been made in Mohammad Ali Park Pooja Pandal.

Corona vaccination in festive season across the countryCorona Vaccination), on the other hand Durga Puja in metropolitan Kolkata (Kolkata Durga PujaIt has been decided to discontinue vaccination during Kolkata Municipal Corporation (Kolkata Municipal CorporationIn ) Deputy Administrator Atin Ghosh gave this information. He told that on the day of Dussehra, from Shashthi i.e. 12 October to Dashami i.e. 15 October, vaccination will be completely stopped. After that everyone will get the dose of vaccine as per the same rules.

He told that during Durga Puja in Kolkata, there is a huge crowd of people from all over the state as well as the country. In such a situation, the administration and other personnel will be busy in maintaining the safety and other facilities of the people. That is why it has been decided to stop vaccination for four days for the time being. Apart from this, there is also another reason that at present there is less supply of vaccines with Kolkata Municipal Corporation, due to which everyone’s needs will not be met. Once Durga Puja is over, once again the process of vaccination will be started.

776 people corona positive in a day in Bengal

NS. The theme of this year’s pandal is ‘Vaccination Veins Over Corona’ by the Ali Park Youth Association Committee. The pandal was inaugurated by MP Sudip Bandyopadhyay and on this occasion Tapas Roy, Naina Bandyopadhyay, Vivek Gupta, Sanjay Bakshi, Smita Bakshi, Rehana Khatoon etc. were present. Surendra Kumar Sharma, the general secretary of the committee, said that if the Durga Puja of the year 2020 was spent in corona infection, then the Durga Puja of the year 2021 is dedicated to vaccination. So this year we are trying to tell the importance of vaccination in our worship premises. Note that last year Mr. Ali Park depicted Mahishasur as Coronasur. Patron Ramchandra Badopalia, Chairman Manoj Poddar, Working President Pramod Chandak, Joint Secretary Ashok Ojha, Pawan Bansal, Ganesh Sharma, Treasurer Subhash Chandra Goenka, Vice Chairman Om Prakash Poddar and other dignitaries were present.

Kolkata Durga Puja: A Durga Puja pandal in Kolkata is telling a painful story of migrant laborers and NRC victims

Hemkund Sahib Yatra: The doors of Hemkund Sahib Gurudara will be closed today, Shabad Kirtan started from 9 am; Devotees reached the last Ardas