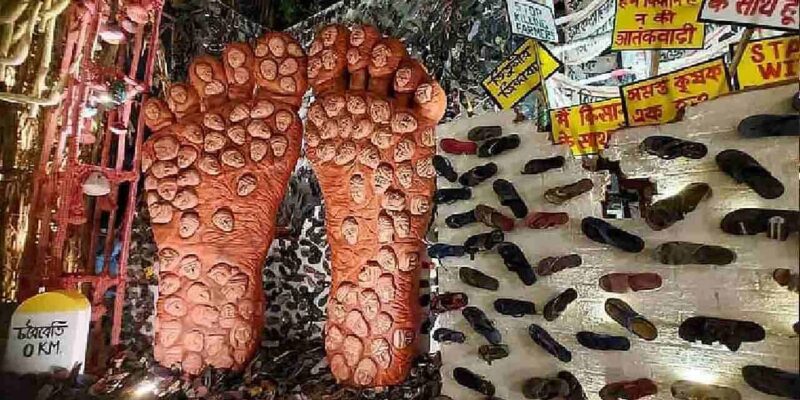 Kolkata’s Dum Dum Park Bharat Chakra Puja Committee (DumDum Park Bharat Chakra Puja Committee) The Puja Pandal (Puja Pandals) in footwear (ShoesPuja organizers have got relief for the time being on the use of ). The Calcutta High Court has refused to interfere in the matter. On Thursday, Judge Kaushik Chand of the Calcutta High Court said that the court will not take any action on the basis of social media reports and will not interfere in the matter in the court.

Let us tell you that the farmers’ movement has been depicted in the Puja pandal of Dum Dum Park Bharat Chakra Puja Committee and shoes and slippers have been used in the pandal. Leader of Opposition and BJP leader Shubhendu Adhikari, Vishwa Hindu Parishad protested. With this, the local people went to the police station and filed a mass petition against the worship committee and an FIR was filed at the Lake Town police station and a case was filed in the court.

High Court will not interfere in this matter at present

Justice Kaushik Chand, while hearing the matter on Thursday, said that the court is not interfering at present in the case registered against Dum Dum Park Bharat Chakra. Court will not interfere. The court will not take any action on the basis of social media reports submitted by the plaintiff. The police will submit the report on October 25. After that the next step will be taken. Judge Kaushik Chand said that the theme of the puja is ‘Dhan nahi dega, maan nahi dega’. How are shoes related to this? During the hearing of this case, Advocate General Soumyendra Nath Mukherjee said that wherever there is an attack on the mass movement starting from Jallianwala Bagh, a lot of shoes are seen falling after the fight. When agitating farmers were being attacked in Uttar Pradesh, the shoes of the dead farmers were visible. That’s why shoes have been used in this theme. Investigation revealed that the pavilion has two parts. The first part has only the mandapa and the second part is the subject matter. The distance of Maa’s mandap with the theme is 11 feet, so the argument of insulting Maa’s mandap is not proved in any way.

The organizers of the pandal were accused of hurting Hindu sentiments

Let us inform that advocate Prithvijay Das had sent a legal notice to the worship committee calling it a serious insult to Goddess Durga and hurting the spirit of Sanatan Hinduism. The legal notice also sought a detailed explanation as to why the shoes were used. The advocate had called it hurting the sentiments of Hindu Sanatan Dharma, while the worship committee said that it was a symbol of the peasant movement in the country. From BJP leader Shubhendu Adhikari to some local people, there was a demand to remove shoes and slippers from the pavilion.