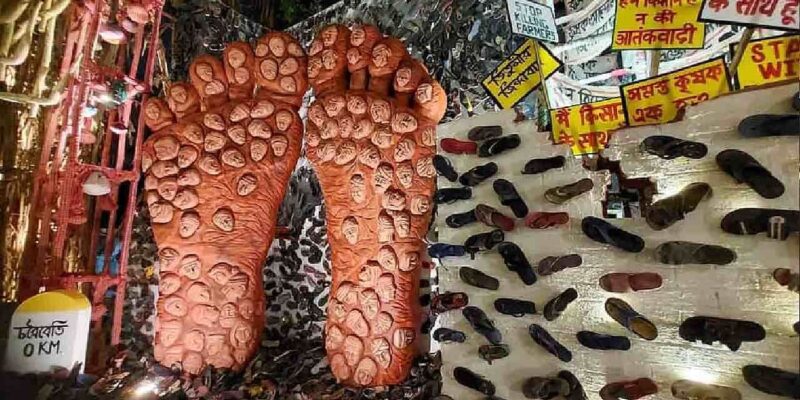 File photo: Shoes and slippers have been used in the puja pandal of Dum Dum Park Bharat Chakra Puja Committee.

On the other hand, an advocate has also sent a legal notice to the Puja Committee, calling it hurting the sentiments of Hindu Sanatan Dharma, while the Puja Committee says that it is a symbol of the farmers’ movement in the country. The demand letter was handed over to the Laketown police station on the afternoon of Mahasashti. In which it has been said that the shoes should be removed from the worship mandap as soon as possible. On Monday afternoon, around three o’clock, some local people appeared at the Laketown police station with a written demand. They allege that this has hurt the sentiments of Hindu religion. They claim that it is completely unconstitutional. He has appealed to the Laketown Police to take action.

In the mass petition given in the police station, it was termed as uncultured

One of the representatives of the Dum Dum Park area who went to the Laketown police station. Among them was Jayant Kole. He said, “This is uncultured. This needs to be stopped as soon as possible. This is universal worship, for the happiness of all. This depravity is destroying the whole worship environment. We are ordinary people. We are very sad to see such a scene. Mother’s puja pandal is decorated with shoes. We strongly condemn this. We have taken this step so that tomorrow such worship can be stopped.” Jayant Kole said that they have filed a mass petition in the police station.

Please tell that Shubhendu Adhikari has called it an insult to Hindu faith and has demanded immediate intervention of the state Chief and Home Secretary in the matter and remove the slippers before Shashthi. Let us tell you that the Durga Puja pandal built by Bharat Chakra Club in Dum Dum Park has been made on the theme of the farmers’ movement and footwear has been used in its decoration. Former Meghalaya Governor and senior BJP leader Tathagata Rai has said that everything cannot be tolerated in the name of freedom of art. On the other hand, advocate Prithvijay Das has sent a legal notice to the worship committee calling it a serious insult to Goddess Durga and hurting the spirit of Sanatan Hinduism. The legal notice also sought a detailed explanation as to why the shoes were used.