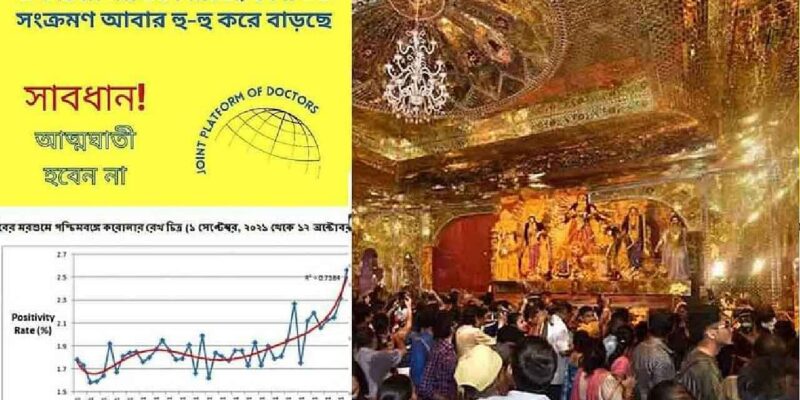 The world famous Durga Puja of West Bengal (Durga Puja) Despite lakhs of restrictions to roam, a record number of people have started coming out on the streets. From Kolkata’s streets and Howrah station to every corner of the metropolis, a long line of people in large Durga Puja pandals (Durga Puja Pandals), but at the same time the corona (Corona) is also increasing, which has become a cause of concern for the administration. Despite repeated warnings from the administration and strict guidelines of the High Court, people are gathering in the pandals. The positivity rate of Corona has increased from 2.5 to 2.74. In the last 24 hours, 771 people have been infected with Corona and 11 people have died.

There is a lot of concern about COVID infection in Kolkata too. Double century has been crossed in Kolkata. In Kolkata, the number of corona infections has increased to 203 in one day. Three people have died. The number of victims in North 24 Parganas district is 128. Four people have died. A chart has been released by the Joint Doctors Forum, in which it is clearly seen how the graph of corona is increasing in the state. How has the positivity rate increased in Corona in the last few days? This is also clear from the latest bulletin of the state government. On the day of Chaturthi, the positive rate of Korna was 2.13 percent, which has now increased to 2.74.

The manner in which the crowd of worshipers have been seen on the streets of Kolkata on Wednesday night is a matter of concern and the provisions of physical distance have not been seen anywhere. Apart from this, most of the people who went to worship did not have masks on their faces. Even though the puja organizers are distributing masks etc., it is not possible for everyone to do so. Overall, the second wave of corona may have weakened, but the way people are coming out on the streets of the metropolis for worship, it can once again give the epidemic a chance for a new infection.

Before Durga Puja, a directory was issued by the State Health Department requesting people to keep away from public meetings and crowds keeping in mind the possible third wave of corona infection, but this does not seem to be happening during the worship. Is. Perhaps this has the effect that once again the corona infection has started increasing in the entire state including metropolis Kolkata.

Garuda Purana: The person is lying or right, identify with these signs!

Rajasthan: BJP furious over the statement of the Education Minister, the former chairperson of the Women’s Commission said- ‘She is not an education minister but a foolish minister’