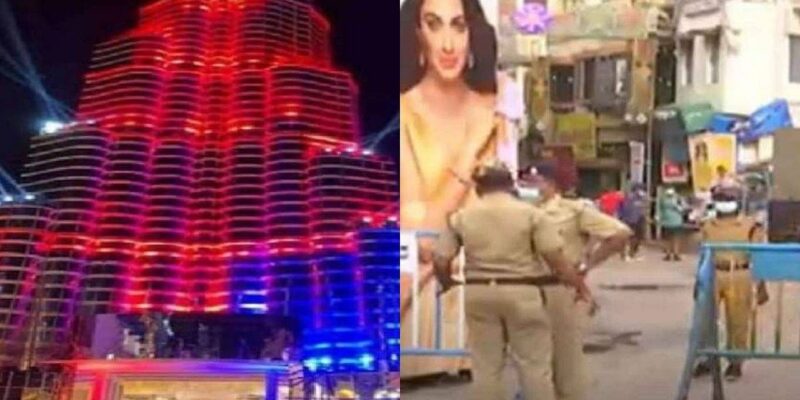 Photo: A ban on the entry of spectators in the pandal built on the lines of Burj Khalifa in Kolkata.

The tallest building in the world, Dubai’s Burj Khalifa (Burj KhalifaAfter announcing the closure of the laser show of Kolkata’s Pooja Pandal, now Sreebhumi Sporting Club (Shreebhumi Club‘No Entry’ on the entry of spectators in this huge 150 feet high pandal built byNo Entry) has been installed. On the night of Maha Ashtami, the district administration decided to ban the entry of spectators. After this Mahanavami (Mahanavmi) only policemen and local people are visible near the puja pandal in the morning. The crowd gathering in the pandal is completely absent.

On the morning of Navami, no one except the local people is seen in front of the worship mandap of Shribhoomi. Private security guards and police are deployed. The Puja Mandap has three entrances and exits. There is one from Gholakata side and one from Keshtopur side and another VIP entry-exit. Police pickets have been put up at all the entrances. Local residents can enter the pavilion only by showing their identity card.

The whole incident started last night at 7 pm. The police had to struggle to deal with the crowd in the pavilion. After this, the Bidhannagar Police Commissionerate requested the worship organizers to switch off the lights of Burj Khalifa. There was also a dispute between the puja organizers and the police regarding this. But the decision was announced in a press conference after midnight on Ashtami. In the presence of highly placed police officials, Fire Minister and chief organizer of the puja Sujit Basu informed that from today, ie from ninth, no visitor will be able to enter the Sreebhumi Puja Mandap. However, other rituals of worship will continue as usual.

The 300 different lights emitting from the pandal were threatening to divert the planes landing at the nearby Dum Dum airport. Puja organizers have called it off after several pilots complained about problems being caused by the lighting of the pandal at the time of landing. Sources said that three different pilots had complained to the Kolkata Air Traffic Control (ATC) in this regard. The pilot said that he was having trouble landing the plane because of the light. ATC had informed the Kolkata Airport Authority about this, after which the laser light show has been called off; Netaji Subhas Chandra Bose International Airport in Dum Dum, Kolkata is very close to the Durga Puja pandal. A senior airport official said that as soon as the ATC received the complaint, the local police was informed in this regard and the laser show was completely stopped.

New PM Fumio Kishida dissolves parliament in Japan, now parliamentary elections will be held in the country on October 31