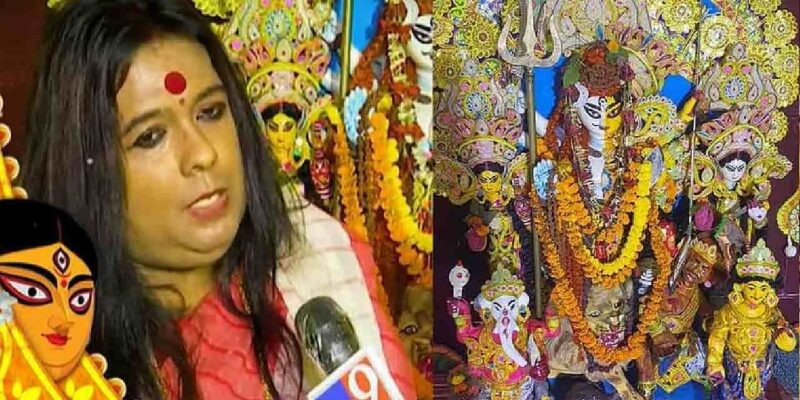 Photo: People of Transgenders community celebrate the festival of Durga Puja with the idol of Ardhanarishwar in Kolkata.

In Kolkata’s Kalikapur, people of the transgender community have made an idol of Maa Durga in the form of Ardhanarishvara. Transgender people are very excited about Durga Puja and worship is being followed with full devotion. Association of Transgenders member Ranjita Sinha has organized a puja at her home in Kalikapur.

Maa Durga is being worshiped in the form of Ardhanarishvara

Association of Transgenders member Ranjita Sinha told that this time the festival is being celebrated in the shelter home provided by the Ministry of Social Justice of the Central Government. After worshiping the idol of Ardhanarishvara of Shiva and Parvati, it is kept here. Ranjeeta said, “Our symbolic form is that of Ardhanarishvara. She is Shiva and Parvati. We are facing so much gender inequality, we want to send a message to those who do, that God has a divine form. Half Shiva and half nature.

There is special enthusiasm in the transgender community regarding worship

Let us tell you that a section of the society still does not look at the transgender community with a good eye. They are bound to lead a backward life. Many of them have participated in the puja for the first time this time. There is a strange satisfaction in their eyes, on their faces. There is a feeling of ultimate peace. He says, “For the first time I am worshiping so well like this.” Ryan Sen is also a convert. He said, “This is the first time I have stood in front of my mother, whom I trust from the bottom of my heart.” This community is still considered backward in the society, but there are also lawyers, professors, policemen, artists, actresses and those who have achieved their place in the society, but there are still many people whose There is no right feeling towards them in the mind. Still a section of the society is not ready to welcome them in the mainstream. Ranjita Sinha says, “Our aim is to push them away and keep everyone happy for the four days of the puja. No one should be deprived of that joy.

Aditya Birla AMC shares fall after a flat start in the market, investors got a shock

There is a huge shortage of DAP in Rajasthan, farmers upset, the state targets the Center