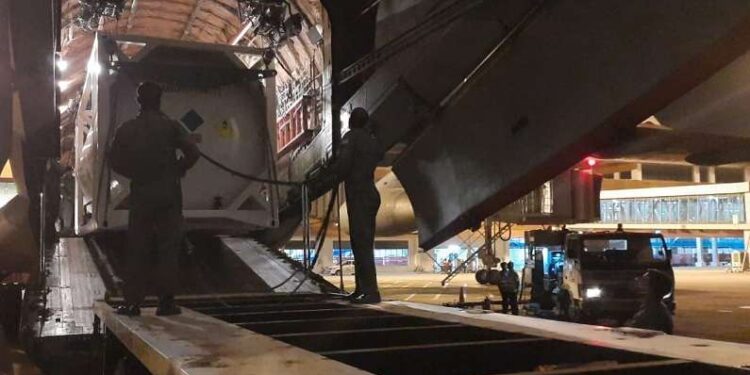 The second wave of Coronavirus in the country seems to have stopped, although the danger still remains and the work of bringing medical oxygen from abroad is also going on. In the same order, Singapore (Singapore) to 20 tons of oxygen (Medical Oxygen) carrying three oxygen tankers reached Kochi airport by special flight on Monday night. Earlier on June 4, INS Airavat of the Indian Navy had reached Visakhapatnam from Vietnam and Singapore with 158 metric tonnes of medical oxygen, 2,722 oxygen cylinders and 10 ventilators and other corona relief material in seven cryogenic oxygen tanks.

Amidst the threat of Corona, Singapore started sending relief materials to India in April, 256 oxygen cylinders were dispatched in two Air Force planes. After this, help has been continuously sent to India from Singapore through special flights or with the help of the Indian Army. On May 10, INS Airavat arrived at Visakhapatnam from Singapore with eight cryogenic oxygen tanks and about 4,000 oxygen cylinders along with other vital medical equipment.

After this, INS Jalashwa had reached Visakhapatnam port on 23 May carrying 18 cryogenic oxygen containers, 3,650 oxygen cylinders, 39 ventilators and other medical supplies from Brunei, Malaysia and Singapore. At the same time, America, Russia, France, Germany, Australia, Ireland, Belgium, Romania, Luxembourg, Portugal, Sweden, New Zealand, Kuwait and Mauritius have also provided medical help to India in the midst of this crisis.

situation of corona infection in the country

The impact of the second wave of corona infection in the country has reduced significantly. With the decline in new cases, the positivity rate has also come down. The weekly positivity rate in the country is currently 6.21 percent. At the same time, the number of active cases has come down to 14 lakh, which is 4.85 percent of the total infected cases. On Monday, Tamil Nadu recorded the highest number of 19,448 new cases of infection, 11,958 in Karnataka, 10,219 in Maharashtra and 9,313 in Kerala. So far 28,252 cases of black fungus (mucarmycosis) have been reported in the country. Of these, 86 per cent people had been infected with COVID and 62 per cent people had a problem of diabetes.

read this also – Corona Cases Update: After 56 days in Jammu and Kashmir, cases of infection are less than 1 thousand, 16 people died