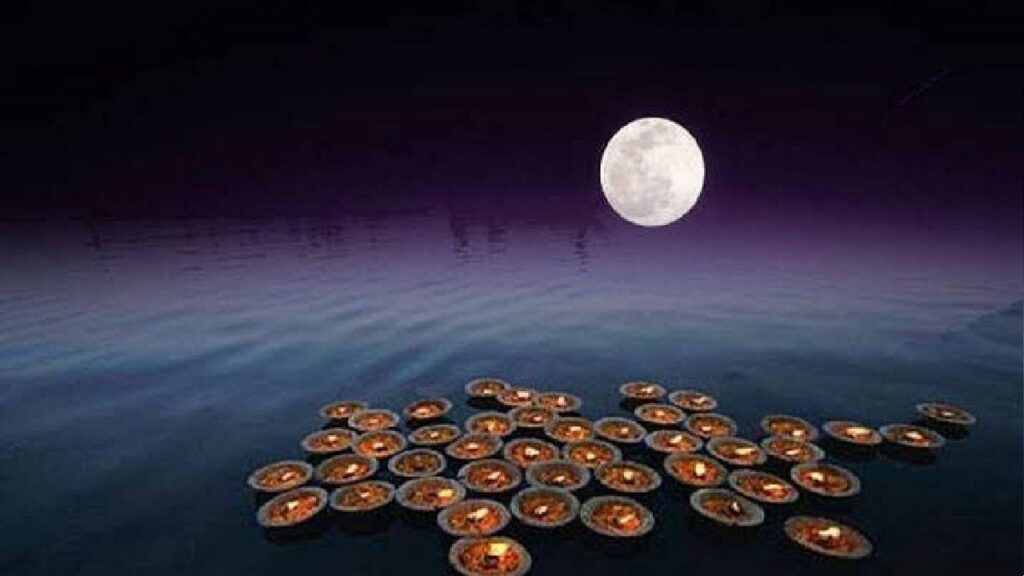 Kartik Purnima is also known as Tripuri Purnima. This full moon has been given the name of Tripuri Purnima because it was on the day of Kartik Purnima that Lord Bholenath had killed the great asura named Tripurasura and he was worshiped as Tripurari. Therefore, on this day the deities come to the Ganga Ghat and light a lamp to show their happiness. For this reason, this day is celebrated as Dev Deepawali.

According to the legend, there was a demon named Tarakasur. He had three sons – Taraksh, Kamalaksha and Vidyunmali. Karthik, the eldest son of Lord Shiva killed Tarakasur. The three sons were very sad to hear the news of their father’s murder. Together, all three did severe penance to ask for a boon from Brahma. Brahmaji was pleased with the penance of all three and said that what are the demands you want to ask for a boon. All three asked Brahma ji for the boon of being immortal, but Brahma ji asked them to ask for some other boon besides this.

After this, all three thought of some other boon and this time asked Brahmaji to build three separate cities – in which all could sit and roam the whole earth and sky. After a thousand years, when we meet and the cities of all three of us become one, and the deity who has the ability to destroy all the three cities with a single arrow, he should be the cause of our death. Brahmaji gave him this boon.

All three were very happy after getting the boon. At the behest of Brahmaji, Maydanava built three cities for him. A city of gold was built for Taraksh, silver for Kamala and iron for Vidyunmali. Together, the three got their authority over the three worlds. Lord Indra was frightened by these three demons and went to the shelter of Lord Shankar. Listening to Indra, Lord Shiva built a divine chariot to destroy these demons.

Everything in this divine chariot was made of gods. The wheels were made from the Moon and the Sun. Indra, Varuna, Yama and Kuber became the four horses of the chariot. Himalayas become bow and Sheshnag becomes Pratyancha. Lord Shiva himself became the arrow and Agnidev became the point of the arrow. Lord Shiva himself rode on this divine chariot. A fierce battle ensued between this chariot made by the gods and the three brothers. As soon as these three chariots came in a straight line, Lord Shiva destroyed all three by leaving an arrow. After this slaughter, Lord Shiva came to be called Tripurari. This slaughter took place on the full moon of Kartik month, hence this day also came to be known as Tripuri Purnima.

Kapal Mochan is one of the holy places in India. It is believed about this pilgrimage located in Yamunanagar district of Haryana that Lord Shiva was freed from Brahmadosha by bathing in Som Sarovar situated at Kapal Mochan. At the same time, there is such a myth about this fair that if any MLA or minister comes to Kapal Mochan during the fair, then he does not win in re-election and neither comes to power.

According to Skanda Mahapuran, due to the influence of Kali Yuga, Brahma started having bad thoughts in his mind towards his daughter Saraswati. To avoid this, Saraswati sought refuge from Lord Shankar in Dvaitavana. To protect Saraswati, Lord Shankar beheaded Brahma, which made him commit the sin of killing Brahma. This made the mark of Brahma Kapali in the hands of Lord Shankar. Even after bathing and donating in all the pilgrimages, the sign of Brahma Kapali did not go away. While roaming around, Bholenath along with Parvati stayed in the house of a Brahmin named Dev Sharma near the Somsar (Capical Redemption) pond.

According to legend, a cow calf was talking to the cow mother in the ashram of Brahmin Dev Sharma during the night that the Brahmin would castrate her in the morning. The enraged calf said that he would kill the Brahmin. On this, the cow mother forbade the calf to do so because the calf would have incur the sin of killing Brahma. On this the calf told the cow mother the way to get rid of the Brahma murder defect. Mother Parvati also listened to the remedies to be free from defects. On the very next morning, the brahmin started the task of neutering the calf and the calf killed the brahmin, which made him commit the sin of killing Brahma.

The color of the calf and the cow became black. This made the cow mother very sad. On this the calf asked the cow mother to follow him and both of them took a bath in the Somsar pond, due to which their complexion became white again. Thus he became free from Brahma Dosha. After seeing all this scene, Lord Shankar took a bath in the lake at the behest of Mother Parvati. With this his Brahma Kapali defect was removed. Hence the name of this area of ​​Som Sarovar became Kapal Mochan.

Martin Lewis, the founding father of Money Saving Expert (MSE), has warned of a “national…