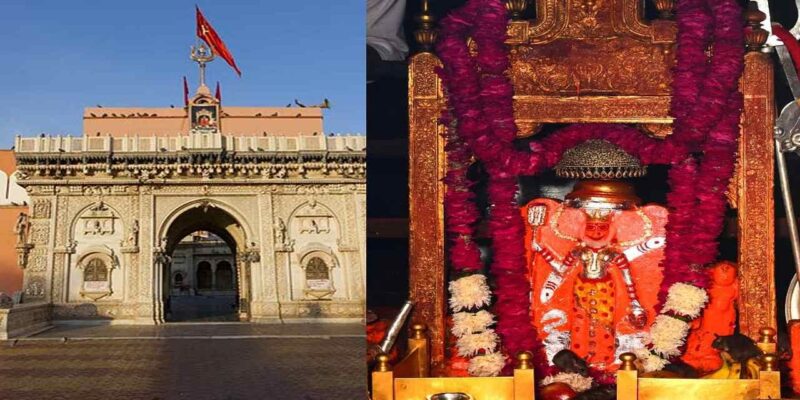 The miraculous temple of the goddess with rats

These days, devotees are reaching the holy Shaktipeeths and Siddhapeeths of the holy mother located in every corner of the country on the great festival of Shakti. One of all the miraculous temples of the goddess is the temple of Karni Mata located in the city of Bikaner. This Shaktipeeth of immense reverence of people full of miracles is located in Deshnok village, 32 km from Bikaner city. Talking about the holy place of Mata Karni, it is the only place in the world where rats are found in large quantities.

Rats are considered to be the servants of the goddess

In the Sanatan tradition, the rat is considered to be the ride of Ganapati, but it is the only goddess temple in the world, where rats are associated with the goddess. These rats are known as the servants of Karni Mata.

In the country and the world, this temple is famous as the temple of rats. The thousands of rats found in the temple are called by the local people as Kaaba. More than 20-25 thousand rats live in the entire temple courtyard. But surprisingly they do not cause any harm to any devotee. If someone sees a white rat in the midst of these rats, then it is believed that his wish will be fulfilled soon.

Rats offer offerings to the mother here and people accept it as prasad. For the rats, people give peanuts and milk etc. to eat here in a big bowl. These rats have the first right on the offerings offered to the mother.

Something like this happened the incarnation of Karni Mata

Regarding the incarnation of Karni Mata, people believe that about six and a half hundred years ago, the mother was born as a girl Ridhu Bai in a bard family. Worship is also done in the temple of Mata by the Baran people. It is believed that after the death of any bard, it is reborn in the form of Kaaba i.e. mouse. Then later the same Kaaba takes birth in a bard family after his death. This is the reason why the Kaaba or the rats are seen with great respect inside the temple.

Once again in the boil in Cryptocurrency, bitcoin crosses 57 thousand dollars, there is still an opportunity to invest and earn