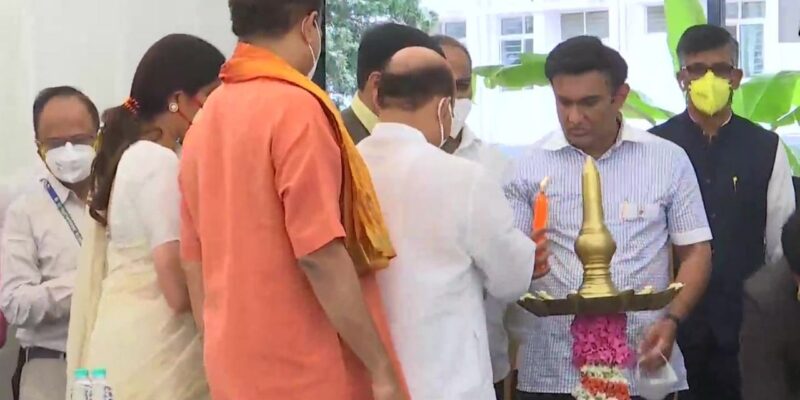 Union Health Minister Mansukh Mandaviya inaugurated the COVID Field Hospital at Rajiv Gandhi Institute, Bengaluru. During this, Karnataka Chief Minister Basavaraj Bommai was also present with him. After the inauguration of the COVID Field Hospital, the Union Health Minister said that such field hospitals can be helped in times of disaster. When there is no space to keep patients in hospitals, then such field hospitals can come in handy. Mansukh Mandaviya said that these hospitals will serve the poor citizens of the state.

Simultaneously, Mansukh Mandaviya along with Chief Minister Basavaraj Bommai inaugurated the Institute of Gastroenterology Sciences and Organ Transplant in Bengaluru today. Praising PM Modi on this occasion, the Union Health Minister said, “Prime Minister Narendra Modi has linked health with development, which is a big deal. Health has always been seen in the country by linking it with physical therapy. It needs to be looked at in a holistic manner. If the country’s citizens are not healthy, then how can that country be healthy. Union Health Minister Mansukh Mandaviya, congratulating the Chief Minister of Karnataka on the success of the Corona Vaccination Campaign, said, “I congratulate the Chief Minister of Karnataka and his team for achieving 83 percent coverage of the first dose of Corona Vaccination and starting the door-to-door vaccination programme. I congratulate you. The central government will continue to support the state in its fight against the pandemic.”

Demand for funds for up-gradation of primary health centers

Earlier on Saturday, Karnataka Chief Minister Basavaraj Bommai and State Health Minister Dr K Sudhakar met Union Health Minister Mansukh Mandaviya in New Delhi on Friday. Where he demanded additional funds allocation under the National Health Mission (NHM) for the up-gradation of Primary Health Centers (PHCs) in the state. Talking to the media after the meeting, Dr Sudhakar said, “The state government is planning to upgrade and modernize all the PHCs. We have demanded additional funds allocation under the National Health Mission to implement this. The Center has responded positively to our request. We have also talked about up-gradation of all trauma care, secondary care across the state.”

After meeting with Union Health Minister Mansukh Mandaviya, Karnataka Chief Minister Basavaraj Bommai informed that the Center has promised to supply more consignments of COVID-19 vaccines to Karnataka. The target is to give a second dose to 70 percent of the eligible people in the state by the end of December. 1.48 crore people have been vaccinated in the state. Chief Minister Bommai said, “The Health Minister has assured us that he will give us more doses of vaccines if needed. We have a stock of 51 lakh doses and a special drive is being run. We are focusing on giving people a second dose. The Center has given full assurance of cooperation for this campaign.

Also read: Prime Minister Narendra Modi happy on the success of vaccination campaign, salutes those who contributed to it

Navratri Special: How the hungry lion came to eat Maa Durga, how did her vehicle become her vehicle?

Auto sector upset due to chip shortage, fear of huge losses this festive season, half the sales are done in just two months