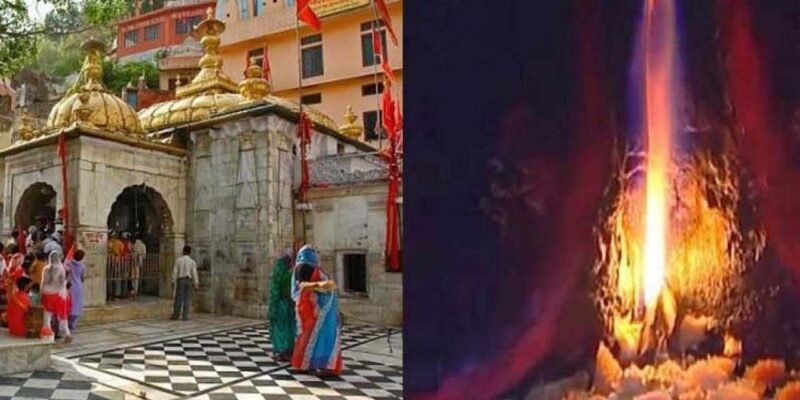 There are many such holy places of power in the country, which are full of all kinds of miracles and the biggest thing is that till date no one has been able to find the secret behind those miracles. One such holy Shaktipeeth is the temple of Mother Jwala Devi, which is located in Kangra, Himachal Pradesh. One of the sacred Shaktipeeths that bestows happiness and prosperity is the divine abode of Maa Jwalamukhi. This holy Shaktipeeth is considered to be a holy and fierce place.

It is believed about Shaktipeeth Mother Jwala Devi that the half-burnt tongue of Mother Sati had fallen here. Which later people called as Maa Jwaladevi and did sadhna. There is no idol in this temple of Mata. The fire that comes out continuously here is considered to be the manifestation of Mother Jwaladevi. Here nine flames are always burning in the nine forms of Shakti.

Akbar had offered a golden umbrella in the court of his mother.

In this miraculous Shaktipeeth of Jwala Devi, a holy flame has been burning for centuries, which does not extinguish if extinguished in any way. It is believed that Emperor Akbar came to this temple during the Mughal period. At first Akbar tried his best to extinguish the holy flame of Bhagwati Shri Jwalaji, but when it failed in the end, he offered a golden umbrella at the feet of Bhagwati.

There is something like this, the holy court of the mother

This temple of Maa Jwaladevi is situated on a mountain range named Kali Dhar. Golden domes and high peaks have been built over this temple. There is a three feet deep and square pit inside the temple, around which the path is made. Right in front of the mother’s court is the Seja Bhawan, which is the bedroom of Bhagwati Jwala Devi. On entering this building, the mother’s bed (throne) is visible in the middle.

These deities also have darshan

In the court of Mother Jwala ji, there is a lot of importance of darshan, worship etc. on the day of Navratri. Apart from this, Brahmin food and girl worship also have special importance here. Apart from the Mata’s court, there are also proven places like Gorakh Dibbi, Shri Radha Krishna Temple, Red Pagoda, Siddha Nagarjuna, Ambikeshwar Mahadev and Tedha Temple.

Also read: Karni Mata Temple: The only temple in the world where rats are offered special bhog during goddess worship