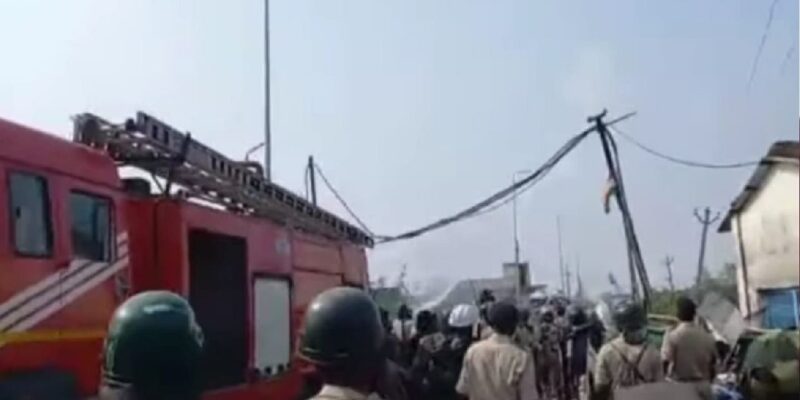 Police at the scene (Photo: NewsNCR

The Banadag coal siding in Hazaribagh district of Jharkhand turned into a battlefield for some time on Sunday. When a clash broke out between the police and the protesters. While the villagers pelted stones at the police vehicle, causing the glass of several vehicles to break, on the other hand, the police resorted to lathi-charge and lobbed tear gas shells to control the crowd. Due to this, for some time there was an atmosphere of chaos in the entire area for some time. Many rural women and men have been injured in this clash.

Villagers were agitating for demands

Let us inform that since October 5, the affected farmers were agitating under the banner of Unemployment Sangharsh Samiti Banadag Siding in the coal dump siding located in Banadag of Katkamdag block of Hazaribagh. Due to the agitation, coal transport was completely stopped from here. Villagers and raito allege that land was taken for coal siding by deceiving them, but in this coal siding neither the villagers are getting employment nor any other benefit is getting under it, on the contrary, due to the pollution caused by it, the local people Farmers and villagers are facing a lot of trouble. Also, the villagers allege that NTPC, with the help of local public representatives, has always been suppressing the voice of the villagers, so they are fighting a cross-cutting battle this time.

Villagers furious on the appeal to end the movement

On Sunday, around 11:00 a.m., police personnel reached the Banadag siding and appealed to the agitators to end the agitation and start transporting again. The villagers got furious due to this talk of ending the movement and some people pelted stones on the police. In retaliatory action, the police lathi-charged there and fired tear gas shells. In this, many rural women and men were injured.

The agitation will continue till the demand is not met.

The injured are being treated at Hazaribagh Medical College Hospital. The injured and their families narrated their ordeal and said that their land has also been lost, they are also affected by coal siding, but neither they have got employment nor have they got proper compensation. He said that he would continue his agitation until his demand was met.